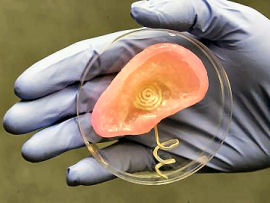 Using off-the-shelf 3D printing tools, Princeton scientists have built a functional cell-cultured ear that can “hear” radio frequencies. The bionic ear is the team’s first effort to create a cybernetic organ: one that not only replicates a human ability, but extends it using embedded electronics

“There are mechanical and thermal challenges with interfacing electronic materials with biological materials,” said lead researcher Michael McAlpine. “Previously, researchers have suggested some strategies to tailor the electronics so that this merger is less awkward. That typically happens between a 2D sheet of electronics and a surface of the tissue. However, our work suggests a new approach – to build and grow the biology up with the electronics synergistically and in a 3D interwoven format.”

Standard tissue engineering involves seeding types of cells, such as those that form ear cartilage, onto a scaffold of a polymer material called a hydrogel. However, the researchers said that this technique has problems replicating complicated three dimensional biological structures. Ear reconstruction “remains one of the most difficult problems in the field of plastic and reconstructive surgery,” they write.

To solve the problem, the team used a 3D manufacturing approach which treats objects as arrays of thin slices. The printer then deposits layers of cells to build up a finished product. In this case, a matrix of hydrogel and calf cells with silver nanoparticles that form an antenna. The calf cells later develop into cartilage. This is the first time that researchers have demonstrated that 3D printing is a viable strategy to interweave printed tissue with electronics.

The finished ear consists of a coiled antenna inside a cartilage structure. Two wires lead from the base of the ear and wind around a helical “cochlea” – the part of the ear that senses sound – which can connect to electrodes. The researchers say that the ear could, in principle, be used to restore or enhance human hearing. The current prototype receives radio waves, but the team plans to incorporate other materials, such as pressure-sensitive electronic sensors, to enable the ear to register acoustic waves.

The researchers say their work opens new ways to think about the integration of electronics with biological tissue. They believe it may be possible to integrate sensors into a variety of biological tissues, for example, to monitor stress on a patient’s knee meniscus. McAlpine adds that further research into the design and implementation of bionic organs could create organs offering; “capabilities beyond what human biology ordinarily provides.”