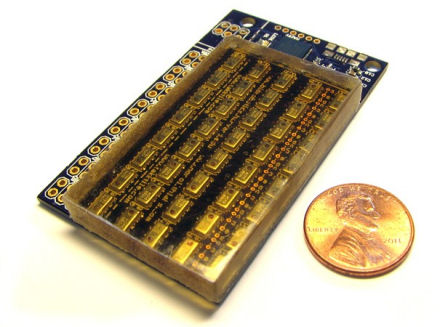 Giving robots a sense of touch has traditionally been an expensive and complex exercise with results that were often less than useful. Now, however, a newly developed tactile sensor using off-the-shelf cell phone components could dramatically change how robots interact with the world around them. The developers of the new TakkTile sensor at the Harvard School of Engineering and Applied Sciences say it is sensitive enough to turn a brute machine into a dextrous manipulator. TakkTile co-creator Leif Jentoft added that the sensor can put what would normally be a high-end technology within the grasp of commercial inventors, teachers, and robotics enthusiasts.

“Despite decades of research, tactile sensing hasn’t moved into general use because it’s been expensive and fragile,” explained Jentoft. “It normally costs about $16,000, give or take, to put tactile sensing on a research robot hand. That’s really limited where people can use it. The traditional technology also uses very specialized construction techniques, which can slow down your work. Takktile changes that because it’s based on much simpler and cheaper fabrication methods.”

The TakkTile sensor makes use of the tiny barometers that are found in cell phones and GPS devices. Designed to sense changes in air pressure, the barometers are laid out in a grid with a layer of vacuum-sealed rubber covering them. Jentoft says the tactile array is sensitive enough to detect a very light touch (gram-level sensitivity) while being robust enough to survive a strike from a hammer or a baseball bat.

“The result, when added to a robotic hand, is a robot that knows what it’s touching. It can pick up a balloon without popping it. It can pick up a key and use it to unlock a door,” added co-creator Yaroslav Tenzer.

Beyond robotics, Jentoft and Tenzer say that the sensor could be used in a range of electronic devices. “A toy manufacturer could make a stuffed puppy that responds to petting; a medical device designer could create a laparoscopic gripper that’s gentle enough to tease apart tissue during surgery,” suggested Jentoft.