You are here: Home › Technology › Bio Inspired › News › Proton-based transistor could control biological processes
By Will Parker on September 21, 2011 in Bio Inspired, News 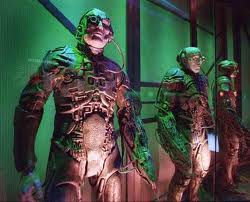 Transistors that control electron flow are the foundation of electronic gadgets, but human bodies and all other living things send signals and perform “work” using ions or protons. Seamlessly interfacing these biologic and electronic realms could now become a reality with the development of a new type of transistor that controls proton – rather than electron – flow. The scientists at the University of Washington (UW) who built the novel semiconductor say that devices using the component could communicate directly with biological processes. They report their work in the journal Nature Communications.

In our bodies, protons activate “on” and “off” switches and are key players in biological energy transfer. Ions open and close channels in the cell membrane to pump things in and out of the cell. Animals, for example, use ions to flex their muscles and transmit brain signals. “So there’s always this issue, a challenge, at the interface – how does an electronic signal translate into an ionic signal, or vice versa?” mused UW materials scientist Marco Rolandi. “We found a biomaterial that is very good at conducting protons, and allows the potential to interface with living systems.”

The biomaterial is a modified form of the compound chitosan originally extracted from squid pen (a structure that survives from when squids had shells). The material is compatible with living things, is easily manufactured, and can be recycled from crab shells and squid pen discarded by the food industry. According to the researchers, this form of chitosan works remarkably well at moving protons. The chitosan absorbs water and forms many hydrogen bonds; protons are then able to “hop” from one hydrogen bond to the next.

The prototype device developed by Rolandi and his colleagues is a field-effect transistor, a type of transistor that includes a gate, a drain and a source terminal for the current. The UW prototype is the first such device to use protons. It measures about 5 microns wide, roughly a twentieth the width of a human hair.

“In our device large bioinspired molecules can move protons, and a proton current can be switched on and off, in a way that’s completely analogous to an electronic current in any other field effect transistor,” Rolandi said. “We now have a protonic parallel to electronic circuitry that we actually understand rather well.” The study suggests that immediate applications would likely be for direct sensing of cells in a laboratory.