You are here: Home › News › Electric cars to moonlight as distributed power stores
By Will Parker on February 19, 2010 in News 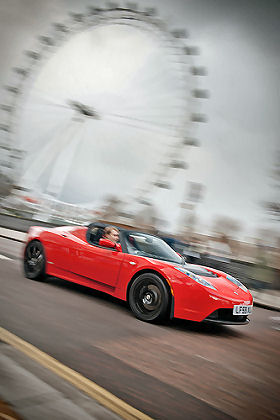 With electric car numbers set to grow rapidly, scientists are exploring the potential for these vehicles to act as “distributed” storage devices for electricity which can then be fed back into the grid to create a robust electric fuel infrastructure.

“Cars sit [idle] most of the time,” said Jeff Stein, a mechanical engineering professor at the University of Michigan. “What if it could work for you while it sits there? If you could use a car for something more than just getting to work or going on a family vacation, it would be a whole different way to think about a vehicle, and a whole different way to think about the power grid, too.”

Stein leads a team exploring electric vehicles that not only use grid electricity to meet their power needs, but also the car’s potential to store electricity from renewable resources and feed electricity back into the grid, a concept known as vehicle-to-grid (V2G) integration.

Stein says the research heralds a new era in which vehicles and electric fuel infrastructure become a system. “The vehicles we have now provide freedom and meet the needs of individuals,” he explained. “Electric vehicles can be a completely different way of using a car, to be something that is defined as being a part of the greater good in concert with others. It has fascinating possibilities.”

Stein and his colleagues envision a world where the electric cars become distributed storage, doubling as mobile holding tanks for electricity, ready to serve in their down time. “If we had lots of [electric vehicles] all plugged into the grid, then what seems like an insignificant amount of energy storage becomes a large energy storage,” he said.

Stein’s team already has made some progress understanding battery health and life – a significant issue in an electric vehicle. “We’re exploring how an owner can charge it and utilize the battery in a way that is battery health conscience to extend the useful life of the battery,” Stein said. “That’s especially important if we also think about charging vehicles at off-peak hours, and it’s also important if we’re talking about this shared opportunity for electric storage. What’s good for the battery isn’t necessarily good for the grid.”