You are here: Home › Technology › Bio Inspired › News › Insect cyborgs get onboard power source
By Will Parker on January 9, 2012 in Bio Inspired, News 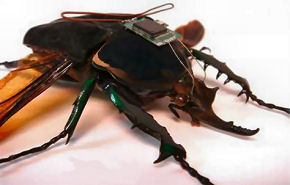 Attaching tiny sensors, recording devices and control mechanisms to insects is now a more realistic prospect after the discovery that electricity can be generated using the insect’s digestive system. The researchers, from Case Western Reserve University, stress that the fuel cell does not depend on movement or light; only on normal insect feeding. Details of their work appear in the Journal of the American Chemical Society.

The idea of using insects as micro-robots or spies is attractive as researchers concede it would be very difficult to build anything mechanical that approached the efficiency of an insect. “It is virtually impossible to start from scratch and make something that works like an insect,” said Daniel Scherson, senior author of the paper. “Using an insect is likely to prove far easier. [But] for that, you need electrical energy to power sensors or to excite the neurons to make the insect do as you want, by generating enough power out of the insect itself.”

The key to generating usable electrical power, Scherson explains, lies in using two enzymes in series at the anode of the fuel cell. The first enzyme breaks the sugar (trehalose, which a cockroach constantly produces from its food) into two simpler sugars, called monosaccharides. The second enzyme oxidizes the monosaccharides, releasing electrons.

After bench testing the system using trehalose solutions, prototype electrodes were inserted in the abdomen of a female cockroach, away from critical internal organs. “Insects have an open circulatory system so the blood is not under much pressure,” co-researcher Roy E. Ritzmann explained. “So, unlike say a vertebrate, where if you pushed a probe into a vein or worse an artery, blood does not come out at any pressure. So, basically, this is really pretty benign [procedure]. In fact, it is not unusual for the insect to right itself and walk or run away afterward.” The researchers found the cockroaches suffered no long-term damage, which they believe bodes well for long-term use.

The researchers are now taking steps to move the technology forward. These include miniaturizing the fuel cell so that it can be fully implanted and allow the insect to run or fly normally; investigating materials that may last longer inside the insect and adding a lightweight rechargeable battery.

Ancient Insect Caught In Amber 20 to 25 Million Years Ago