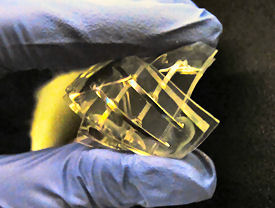 A new generation of biocompatible electronic devices may be in the offing with the development of a memory device that is soft and functions well in wet environments. The developers, at North Carolina State University, said the device had the physical properties of Jell-O. “Conventional electronics are typically made of rigid, brittle materials and don’t function well in a wet environment. Our memory device is soft and pliable, and functions extremely well in wet environments – similar to the human brain,” explained device co-developer Michael Dickey.

The devices are made using a liquid alloy of gallium and indium metals set into water-based gels, similar to those used in biological research. The device’s ability to function in wet environments, and the biocompatibility of the gels, mean that this technology holds promise for interfacing electronics with biological systems – such as cells, enzymes or tissue. “These properties may be used for biological sensors or for medical monitoring,” Dickey says.

The device functions much like memristors, which are vaunted as a possible next-generation memory technology. The individual components of the mushy memory device have two states: one that conducts electricity and one that does not. These two states can be used to represent binary states. Most conventional electronics use electrons to create these 1s and 0s in computer chips. The mushy memory device uses charged molecules to do the same thing.

Normally, whenever a negative charge is applied to one side of the electrode, the positive charge would move to the other side and create another oxidized skin – meaning the electrode would always be resistive. To solve that problem, the researchers doped one side of the gel slab with a polymer that prevents the formation of a stable oxidized skin. Thus, one electrode is always conductive – giving the device the 1s and 0s it needs for electronic memory.