You are here: Home › News › Robot “Skin” Vital For Automated Space Exploration
By Will Parker on June 8, 2005 in News 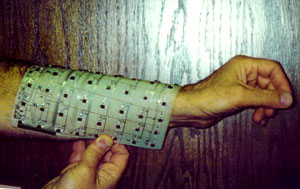 NASA technologist Vladimir Lumelsky from the Goddard Space Flight Center believes the future of robotics lies with the development of a high-tech, sensor-embedded covering that would be able to sense the environment, much like human skin. Lumelsky has begun setting up a laboratory at Goddard to develop a high-tech covering that would enable robots to sense their environment and react to it, much like humans respond when something touches their skin. Lumelsky believes that such a technology, which he refers to as a “High-Tech Skin,” is essential for carrying out the Vision for Space Exploration program as it depends heavily on humans and robots working together under a variety of working conditions, many of them unstructured. “Robots move well on their own, especially when nothing is in the way,” Lumelsky said. But a changing environment makes for a confused robot. “Robots should be able to react, but today’s robots can’t,” he said. “That’s the difference and that’s got to change for exploration.”

Lumelsky believes that touch sensing is key for adaptable and flexible robots. Although great headway is being made in the area of computer vision, vision isn’t enough, he said. “Humans can survive without sight, but they can’t survive without tactile sensing. The skin is the biggest organ in our body. It’s nothing more than a huge sensor.”

To give robots a sense of touch, Lumelsky is developing a “sensitive skin” that would cover a robot. This skin will include more than 1,000 infrared sensors that would detect an object, and send the information to the robot’s “brain.” The brain would digest the information, apply reasoning and react within milliseconds by directing the robot to move. It is anticipated that future skin prototypes will have a higher density of sensors on the skin, which will provide the robots with even greater dexterity.

Work is at an early stage and Lumelsky said that the flexible plastic modules that will house the skin’s electronics will have to undergo a lot of testing to assure that they’re tough enough for space. Other challenges include embedding the electronics on a large surface material and work is needed in the area of motion-planning development and intelligence, he added.

Lost in Space B9 Electronic Robot (Other)