You are here: Home › News › Largest ever self-organizing swarm of robots created
By Will Parker on August 15, 2014 in News 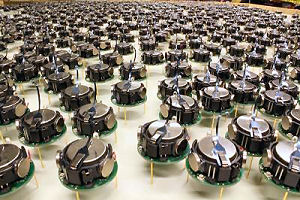 Harvard computer scientists have demonstrated how a self-organizing swarm of 1,024 small robots can collaborate to enact complex behaviors. According to lead developer Radhika Nagpal, the small, simple robots (named “Kilobots”) represent a significant milestone in the development of collective artificial intelligence. The three-legged Kilobots and their swarming behaviors are detailed in the latest issue ofScience.

Nagpal’s work mirrors biological systems that are elegantly simple, yet in large numbers, accomplish complex tasks. “We are especially inspired by systems where individuals can self-assemble together to solve problems,” she explained. “At some level you no longer even see the individuals; you just see the collective as an entity to itself.”

Co-researcher Michael Rubenstein says the team kept the cost of the Kilobots as low as possible. Each robot moves using two vibrating motors that allow it to slide across a surface on its rigid legs. An infrared transmitter and receiver allow it to communicate with a few of its neighbors and measure their proximity – but the robots are myopic and have no access to a bird’s-eye view.

“These robots are much simpler than many conventional robots, and as a result, their abilities are more variable and less reliable,” Rubenstein says. “For example, the Kilobots have trouble moving in a straight line, and the accuracy of distance sensing can vary from robot to robot.” But the Kilobots correct their own mistakes. If a traffic jam forms or a robot moves off-course – errors that become much more common in a large group – nearby robots sense the problem and cooperate to fix it.

Notably, the Kilobots require no management or intervention once an initial set of instructions has been issued. Four robots mark the origin of a coordinate system, all the other robots receive a 2D image that they should mimic, and then using very primitive behaviors – following the edge of a group, tracking a distance from the origin, and maintaining a sense of relative location – they take turns moving towards an acceptable position.

“Increasingly, we’re going to see large numbers of robots working together, whether its hundreds of robots cooperating to achieve environmental cleanup or a quick disaster response, or millions of self-driving cars on our highways,” Nagpal says. “Understanding how to design ‘good’ systems at that scale will be critical. The real-world dynamics – the physical interactions and variability – make a difference, and having the Kilobots to test the algorithm on real robots has helped us better understand how to recognize and prevent the failures that occur at these large scales.”