You are here: Home › Animal Kingdom › News › Penguins counted from space
By Will Parker on April 14, 2012 in Animal Kingdom, News 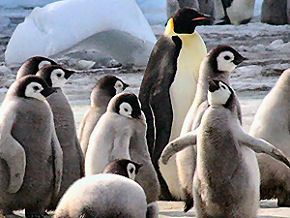 Scientists using very high resolution satellite images to estimate penguin populations around the coastline of Antarctica were surprised to find there were twice as many emperor penguins as previously thought. The results, published in the journal PLoS ONE, provide an important benchmark for monitoring the impact of environmental change on the population of this famous bird.

Peter Fretwell, from British Antarctic Survey and lead author of the study, explained that emperor penguins, with their black and white plumage, stand out against the snow and that their colonies are clearly visible on satellite imagery. In addition, he said the researchers used a technique known as “pan-sharpening” to increase the resolution of the satellite imagery. This allowed the scientists to differentiate between birds, ice, shadow and penguin poo in the photographs. 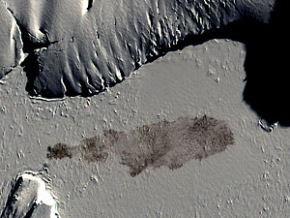 All up, the multinational team of researchers analyzed 44 emperor penguin colonies around the coast of Antarctica, including seven that were previously unknown.

Fretwell said the final population figures were a pleasant surprise to the researchers. “We counted 595,000 birds, which is almost double the previous estimates of 270,000 – 350,000 birds,” he crowed.

Past studies have used satellite imagery to estimate economic growth and levels of conflict in urban areas. This, however, is the first comprehensive population survey of a species from space and the researchers believe space-based censuses may be an important tool for studying other species in remote and harsh areas. “The methods we used are an enormous step forward in Antarctic ecology because we can conduct research safely and efficiently with little environmental impact, and determine estimates of an entire penguin population,” said study co-author Michelle LaRue, from the University of Minnesota. “The implications of this study are far-reaching: we now have a cost-effective way to apply our methods to other poorly-understood species in the Antarctic, to strengthen on-going field research, and to provide accurate information for international conservation efforts.”

Worrying and intelligence evolutionarily inseparable
Water not necessary for life?