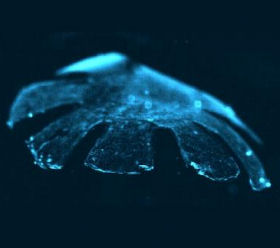 The researchers say the creature – dubbed a medusoid – serves as a proof of concept for reverse engineering a variety of muscular organs and simple life forms. They argue that it also suggests a broader definition of what counts as synthetic life in an emerging field that has predominantly focused on replicating life’s basic building blocks. The techniques used for building the creature are detailed in Nature Biotechnology.

The bioengineering approach used by the team is the opposite of most other nascent artificial organism construction techniques. “In many ways, it is still a very qualitative art, with people trying to copy a tissue or organ just based on what they think is important or what they see as the major components – without necessarily understanding if those components are relevant to the desired function or without analyzing first how different materials could be used,” explains Caltech’s Janna Nawroth. “Because a particular function – swimming, say – doesn’t necessarily emerge just from copying every single element of a swimming organism into a design, our idea was that we would make jellyfish functions – swimming and creating feeding currents – as our target and then build a structure based on that information.” 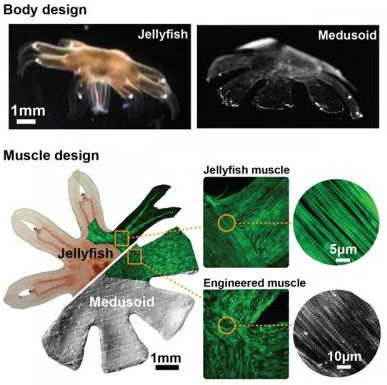 “I was surprised that with relatively few components – a silicone base and cells that we arranged – we were able to reproduce some pretty complex swimming and feeding behaviors [creating feeding currents] that you see in biological jellyfish,” says Caltech’s John Dabiri, citing fluid-dynamics measurements that match up to those of the real animal. “I’m pleasantly surprised at how close we are getting to matching the natural biological performance, but also that we’re seeing ways in which we can probably improve on that natural performance. The process of evolution missed a lot of good solutions.”

Looking forward, the researchers aim to further evolve the artificial jellyfish, allowing it to turn and move in a particular direction, and even incorporating a simple “brain” so it can respond to its environment and replicate more advanced behaviors like heading toward a light source and seeking energy or food. “We’re reimagining how much we can do in terms of synthetic biology,” said Dabiri. “A lot of work these days is done to engineer molecules, but there is much less effort to engineer organisms.”