You are here: Home › Technology › Bio Inspired › News › Artificial neural network created from DNA
By Will Parker on July 21, 2011 in Bio Inspired, News 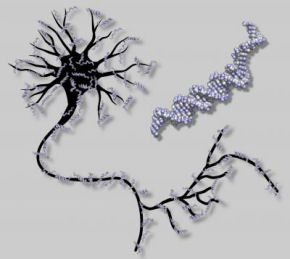 California Institute of Technology (Caltech) researchers have made an artificial neural network out of DNA, creating a circuit of interacting molecules that can recall memories based on incomplete patterns, just as the human brain can. Detailing the work in Nature, lead author Lulu Qian explained that the neural net consisted of four artificial neurons made from 112 distinct DNA strands.

The team based their biochemical neural network on a simple model of a neuron, called a linear threshold function. The model neuron receives input signals, multiplies each by a positive or negative weight, and only if the weighted sum of inputs surpass a certain threshold does the neuron fire, producing an output. “This model is an oversimplification of real neurons,” says paper co-author Erik Winfre. “Nevertheless, it’s a good one.”

To build the DNA neural network, the researchers used a process called a strand-displacement cascade. This method uses single and partially double-stranded DNA molecules. The latter are double helices, one strand of which sticks out like a tail. While floating around in a water solution, a single strand can run into a partially double-stranded one, and if their bases (the letters in the DNA sequence) are complementary, the single strand will grab the double strand’s tail and bind, kicking off the other strand of the double helix. The single strand thus acts as an input while the displaced strand acts as an output, which can then interact with other molecules.

The network can play a mind-reading game in which it tries to identify a mystery scientist. The researchers “trained” the neural network to “know” four scientists, whose identities are each represented by a specific, unique set of answers to four yes-or-no questions, such as whether the scientist was British.

After thinking of a scientist, a human player provides an incomplete subset of answers that partially identifies the scientist. The player then conveys those clues to the network by dropping DNA strands that correspond to those answers into the test tube. Communicating via fluorescent signals, the network then identifies which scientist the player has in mind. Or, the network can “say” that it has insufficient information to pick just one of the scientists in its memory or that the clues contradict what it has remembered. The researchers played this game with the network using 27 different ways of answering the questions (out of 81 total combinations), and it responded correctly each time.

This DNA-based neural network demonstrates the ability to take an incomplete pattern and figure out what it might represent – one of the brain’s unique features. “What we are good at is recognizing things,” says co-author Jehoshua Bruck. “We can recognize things based on looking only at a subset of features. The DNA neural network does just that, albeit in a rudimentary way.”

Systems such as these could provide indirect insight into the evolution of intelligence, the paper suggests. “Before the brain evolved, single-celled organisms were also capable of processing information, making decisions, and acting in response to their environment,” Qian explains. “The source of such complex behaviors must have been a network of molecules floating around in the cell. Perhaps the highly evolved brain and the limited form of intelligence seen in single cells share a similar computational model that’s just programmed in different substrates.”