You are here: Home › News › Prehistory › Clay bubbles may have nurtured self-organizing precursors to life
By Will Parker on February 7, 2011 in News, Prehistory 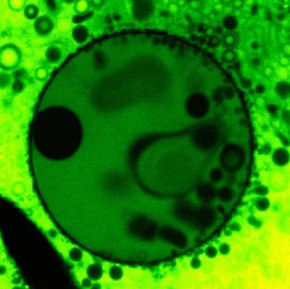 A team of researchers from Harvard, Princeton, and Brandeis universities have demonstrated how small, semi-permeable compartments that form in inorganic clay provide an ideal container for the compartmentalization of complex organic molecules. Scientists say the discovery opens the possibility that the Earth’s first primitive cells might have formed inside inorganic clay bubbles.

“A lot of work, dating back several decades, explores the role of air bubbles in concentrating molecules and nanoparticles to allow interesting chemistry to occur,” says lead author Anand Bala Subramaniam, a doctoral candidate at Harvard’s School of Engineering and Applied Sciences. “We have now provided a complete physical mechanism for the transition from a two-phase clay – air bubble system, which precludes any aqueous-phase chemistry, to a single aqueous-phase clay vesicle system,” Subramaniam says, “creating a semipermeable vesicle from materials that are readily available in the environment.”

The researchers explain, in the journal Soft Matter, how these clay-armored bubbles form naturally when platelike particles of montmorillonite clay collect on the outer surface of air bubbles under water. When the clay bubbles come into contact with simple organic liquids like ethanol and methanol, which have a lower surface tension than water, the liquid wets the overlapping plates. As the inner surface of the clay shell becomes wet, the disturbed air bubble inside dissolves.

The resulting clay vesicle is a strong, spherical shell that creates a physical boundary between the water inside and the water outside. The translucent, cell-like vesicles are robust enough to protect their contents in a dynamic, aquatic environment such as the ocean. Microscopic pores in the vesicle walls create a semipermeable membrane that allows chemical building blocks to enter the “cell,” while preventing larger structures from leaving.

Scientists have studied montmorillonite for hundreds of years, and the mineral is known to serve as a chemical catalyst, encouraging lipids to form membranes and single nucleotides to join into strands of RNA. Because liposomes and RNA would have been essential precursors to primordial life, Subramaniam suggests that the pores in the clay vesicles could do double duty as both selective entry points and catalytic sites.

“The conclusion here is that small fatty acid molecules go in and self-assemble into larger structures, and then they can’t come out,” explained co-researcher Howard A. Stone. “If there is a benefit to being protected in a clay vesicle, this is a natural way to favor and select for molecules that can self-organize.”

In the future, Subramaniam hopes to explore the physical interactions between the clay particles and liquids and also whether these clay vesicles can be found in the natural environment today.

Related:
“Lost” experiment hints at a richer primordial broth
Between The Sheets
Volcanic Clay May Have Served As Womb For Emergent Life
Clay May Have Been Catalyst For Life