You are here: Home › News › Prehistory › Modern humans healthier thanks to Neanderthal nookie
By Will Parker on August 31, 2011 in News, Prehistory 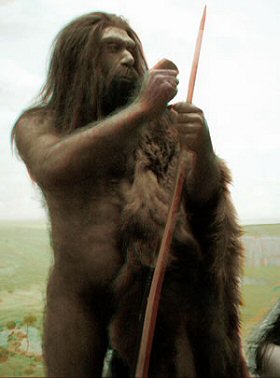 Mating with Neanderthals and another close relative – the recently discovered Denisovans – has endowed some human gene pools with beneficial versions of immune system genes, say researchers at the Stanford University School of Medicine.

Modern humans, Neanderthals and Denisovans all share a common ancestor in Africa, but the groups split into separate, distinct populations approximately 400,000 years ago. The Neanderthal lineage migrated north-westward into West Asia and Europe, and the Denisovan lineage moved north-eastward into East Asia. The ancestors of modern man stayed in Africa until around 65,000 years ago, and then expanded into Eurasia and had amorous encounters with other human-like groups.

Last year, a partial genome sequence of Neanderthals, who died out approximately 30,000 years ago, revealed that these trysts left as much as 4 percent Neanderthal DNA in the genetic blueprint of some present-day humans. Last December, the genome of another human cousin, the extinct Denisovans, made clear that up to 6 percent of some people’s genomes are Denisovan in origin.

The new study, appearing in Science, asserts that these matings had a positive effect on modern human fitness. “The cross breeding wasn’t just a random event that happened, it gave something useful to the gene pool of the modern human,” said Peter Parham, senior author of the study.

The useful gift was the introduction of new variants of immune system genes called the HLA class I genes, which are critical for our body’s ability to recognize and destroy pathogens. HLA genes are some of the most variable and adaptable genes in our genome, in part because the rapid evolution of viruses demands flexibility on the part of our immune system.

Prior to the sequencing of the Neanderthal and Denisovan genomes, Parham and his group had suspected that at least one HLA variant came from archaic humans. They determined that the variant known as HLA-B*73 is rare in present-day African populations but occurs with significant frequency in West Asian populations. The ethnic distribution of HLA-B*73 and its similarity across populations suggested that it came from a relatively recent co-mingling of modern human and archaic human DNA.

Parham’s research team wanted to discern which archaic humans were the source of the HLA-B*73 gene type. In the last year they have found the answer in the genome sequence of a recently discovered human relative, the Denisovans, whose existence first came to light in 2008 with the discovery of an unfamiliar finger bone and tooth in a cave in Siberia.

By comparing the HLA genes of the archaic humans with modern humans, the researchers were able to show that the HLA-B*73 allele likely came from cross breeding with Denisovans. Little is known about what the Denisovans looked like, but the genome sequence extracted from the finger bone gives insight into where they overlapped with modern humans. Gene flow from the Denisovans into modern humans has left the highest frequency of the HLA-B*73 allele in populations in West Asia, the most likely site for the fortuitous mating to have taken place.

Even in West Asian populations, the HLA-B*73 variant never represents more than 5 percent of all known genetic variants. However, other human HLA types that arose from ancient matings are found in much greater frequencies. “Certain traits coming from these archaic humans have become the dominant form,” said Parham. For example, another HLA gene type, called HLA-A*11, is absent from African populations, but represents up to 64 percent of variants in East Asia and Oceania, with the greatest frequency in people from Papua New Guinea. “The likely interpretation was that these HLA class variants provided an advantage to modern human and so rose to high frequencies,” Parham explained.

A similar scenario is seen in some HLA gene types found in the Neanderthal genome, which was also sequenced from DNA extracted from ancient bones. These gene variants are common in European and Asian populations but rare in African populations. “We are finding frequencies in Asia and Europe that are far greater than whole genome estimates of archaic DNA in modern human genomes, which is 1 to 6 percent,” said Parham. Within one class of HLA gene, the researchers estimate that Europeans owe half of their variants to interbreeding with Neanderthals and Denisovans, Asians owe up to 80 percent and Papua New Guineans, up to 95 percent.