You are here: Home › News › Prehistory › Earliest cave art was erotica, say anthropologists
By Will Parker on May 18, 2012 in News, Prehistory 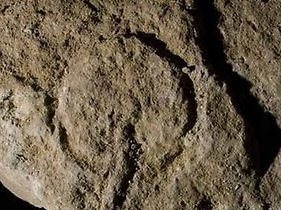 New York University anthropologist Randall White, one of the researchers working on the project, said the works were some the oldest evidence of any kind of graphic imagery. Reporting his findings in The Proceedings of the National Academy of Sciences, White noted that the drawings include what appear to be images of the female vulva, illustrated by circles with small slits on one side. ”You see this again and again and again. There are also very simple images, in profile, of animals, including horses and lion-like big cats.”

White believes the art was likely meant to adorn the interior of a shelter for reindeer hunters. “They decorated the places where they were living, where they were doing all their daily activities,” he said. “There is a whole question about how and why, and why here in this place at this particular time you begin to see people spending so much time and energy and imagination on the graphics.”

The work is less sophisticated than the well known paintings of animals found in France’s Grotte Chauvet, believed to be between 30,000 and 36,000 years old. The engravings and paintings at Abri Castanet are rougher and more primitive in style and were likely created by everyday people, White believes. “Unlike the Chauvet paintings and engravings, which are deep underground and away from living areas, the engravings and paintings at Castanet are directly associated with everyday life, given their proximity to tools, fireplaces, bone and antler tool production, and ornament workshops,” he explained.