You are here: Home › Technology › Chemistry › News › Water droplet computer can algorithmically manipulate physical matter
By Will Parker on June 9, 2015 in Chemistry, News 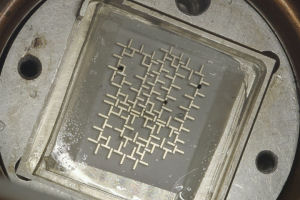 Researchers at Stanford have built a synchronous computer that operates using the unique physics of moving water droplets. The droplet processor is significantly slower than an electronic computer, but the research team says that speed is not their aim; rather, they want to develop a completely new class of computers that can precisely control and manipulate physical matter.

“We already have digital computers to process information. Our goal is not to compete with electronic computers or to operate word processors on this,” explained Stanford bioengineer Manu Prakash (appearing left in photo below). “Our goal is to build a completely new class of computers… Imagine if when you run a set of computations that not only information is processed but physical matter is algorithmically manipulated as well. We have just made this possible at the mesoscale.”

The H2O computer combines Prakash’s expertise in manipulating droplet fluid dynamics with a fundamental element of computer science – an operating clock. The tiny droplets act as bits of information and their precise movements process both information andphysical materials simultaneously, while a rotating magnetic field acts as a clock to synchronize all the droplets. 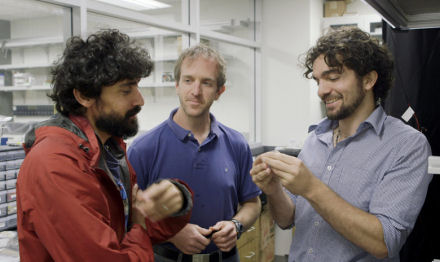 Developing a clock for a fluid-based computer required some creative thinking. It needed to be easy to manipulate, and also able to influence multiple droplets at a time. The system needed to be scalable so that in the future, a large number of droplets could communicate amongst each other without skipping a beat. Prakash and his team built arrays of tiny iron bars on glass slides that look something like a Pac-Man maze. They laid a blank glass slide on top and sandwiched a layer of oil in between. Then they carefully injected into the mix individual water droplets that had been infused with tiny magnetic nanoparticles.

Next, they turned on the magnetic field. Every time the field flips, the polarity of the bars reverses, drawing the magnetized droplets in a new, predetermined direction, like slot cars on a track. Every rotation of the field counts as one clock cycle, like a second hand making a full circle on a clock face, and every drop marches exactly one step forward with each cycle.

A camera records the interactions between individual droplets, allowing observation of computation as it occurs in real time. The presence or absence of a droplet represents the 1s and 0s of binary code, and the clock ensures that all the droplets move in perfect synchrony, and thus the system can run virtually forever without any errors.

“Following these rules, we’ve demonstrated that we can make all the universal logic gates used in electronics, simply by changing the layout of the bars on the chip,” said co-researcher Georgios Katsikis. “The actual design space in our platform is incredibly rich. Give us any Boolean logic circuit in the world, and we can build it with these little magnetic droplets moving around.”

Their paper, appearing in Nature, describes the fundamental operating regime of the system and demonstrates building blocks for synchronous logic gates, feedback and cascadability – hallmarks of scalable computation. A simple-state machine including 1-bit memory storage is also demonstrated using the above basic building blocks.

The current chips are about half the size of a postage stamp, and the droplets are smaller than poppy seeds, but Katsikis said that the physics of the system suggests it can be made even smaller. Combined with the fact that the magnetic field can control millions of droplets simultaneously, this makes the system exceptionally scalable.

Prakash said the most immediate application might involve turning the computer into a high-throughput chemistry and biology laboratory. Instead of running reactions in bulk test tubes, each droplet can carry some chemicals and become its own test tube, and the droplet computer offers unprecedented control over these interactions.

Because the system is extremely robust and the team has uncovered universal design rules, Prakash plans to make a design tool for these droplet circuits available to the public. Any group of people could then cobble together the basic logic blocks and make any complex droplet circuit they desire.

“We’re very interested in engaging anybody and everybody who wants to play, to enable everyone to design new circuits based on building blocks we describe in this paper or discover new blocks. Right now, anyone can put these circuits together to form a complex droplet processor with no external control – something that was a very difficult challenge previously,” Prakash said. “If you look back at big advances in society, computation takes a special place. We are trying to bring the same kind of exponential scale up because of computation we saw in the digital world into the physical world.”