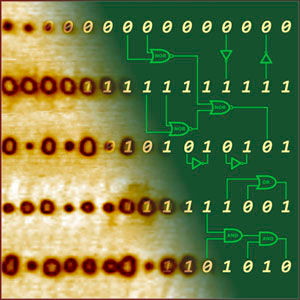 Scientists at Oak Ridge National Laboratory (ORNL) say their observations of unexpected behaviors in ferroelectric materials lend support to the concept of “memcomputing,” an emergent computing paradigm in which information storage and processing occur on the same physical platform.

The discovery was made while the ORNL team were using a scanning probe microscope to draw areas of switched polarization (known as domains) on the surface of the ferroelectric. As they wrote increasingly dense arrays, the researchers were surprised to see the domains forming complex and unpredictable patterns on the material’s surface.

“When we reduced the distance between domains, we started to see things that should have been completely impossible,” said ORNL’s Anton Ievlev, the first author of a study that details the discovery. “All of a sudden, when we tried to draw a domain, it wouldn’t form, or it would form in an alternating pattern like a checkerboard. At first glance, it didn’t make any sense. We thought that when a domain forms, it forms. It shouldn’t be dependent on surrounding domains.”

After studying patterns of domain formation under varying conditions, the researchers realized the complex behavior could be explained through chaos theory. “One domain would suppress the creation of a second domain nearby but facilitate the formation of one farther away – a precondition of chaotic behavior,” said co-researcher Sergei Kalinin.

The discovery is intriguing, as chaotic behavior is generally realized in time, not in space. “An example is a dripping faucet: sometimes the droplets fall in a regular pattern, sometimes not, but it is a time-dependent process,” explained Kalinin. “To see chaotic behavior realized in space, as in our experiment, is highly unusual.”

The University of South Carolina’s Yuriy Pershin, who collaborated on the study, said the ORNL work displays the key characteristics required for memcomputing.

“Memcomputing is basically how the human brain operates: Neurons and their connections – synapses – can store and process information in the same location,” Pershin said. “This experiment with ferroelectric domains demonstrates the possibility of memcomputing.”