You are here: Home › News › Exciton-based circuits promise leap in computer speed
By Will Parker on September 28, 2009 in News 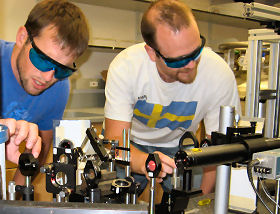 Physicists at the University of California, San Diego, have successfully created super-fast integrated circuits with particles called “excitons,” bringing the possibility of a new type of extremely fast computer based on excitons closer to reality.

Their discovery, detailed in the journal Nature Photonics, follows the team’s demonstration last summer of an exciton-based integrated circuit capable of working at 1.5 degrees Kelvin. Unfortunately, such temperatures are achievable only in special research laboratories, limiting the usability of the device.

Now, however, the team reports that they have succeeded in building an integrated circuit that operates at 125 degrees Kelvin, a temperature that can be easily attained commercially with liquid nitrogen.

“Our goal is to create efficient devices based on excitons that are operational at room temperature and can replace electronic devices where a high interconnection speed is important,” said UCSD’s Leonid Butov, who headed the research team. “We’re still in an early stage of development. Our team has only recently demonstrated the proof of principle for a transistor based on excitons and research is in progress.”

Butov explained that excitons are pairs of negatively charged electrons and positively charged “holes” that can be created by light in a semiconductor such as gallium arsenide. When the electron and hole recombine, the exciton decays and releases its energy as a flash of light.

The fact that excitons can be converted into light makes excitonic devices faster and more efficient than conventional electronic devices with optical interfaces, which use electrons for computation and must then convert them to light for use in communications devices. “Our transistors process signals using excitons, which like electrons can be controlled with electrical voltages, but unlike electrons transform into photons at the output of the circuit,” Butov added. “This direct coupling of excitons to photons allows us to link computation and communication.”