You are here: Home › News › Atom Wrangling Gets Serious
By Will Parker on October 12, 2005 in News 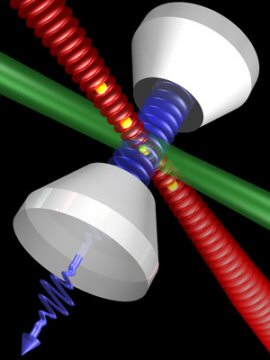 Scientists at the Max Planck Institute report that they were able to cool single rubidium atoms and “store” them for 17 seconds. The researchers, writing in Nature, said this was by far the longest storage time ever achieved in a strongly coupled resonator system. The ability to control single atoms in this way is a critical step in the development of quantum computing devices.

The trapping and storing of atoms is an elaborate process. Typically, laser “cooling” – where an individual atom has energy taken from it – is used in conjunction with a magneto-optical trap.

To achieve this, the atom is shot from six directions with laser beams whose frequency lies a little below the excitation energy. The experimenters at the Max Planck Institute of Quantum Optics prepared rubidium atoms in this way and then trapped them in the electromagnetic field of a laser beam. The atoms were then manipulated over a distance of 14 millimeters in an optical resonator made of two opposite concave mirrors. Once the atoms are between the mirrors, the scientists changed the geometry of the light trap, mirroring the laser beam back onto itself. A standing light wave then builds and the atoms are held in the trap’s cavities.

The researchers, led by Professor Gerhard Rempe, report that the cooling effect is enhanced when the frequency of the resonator is somewhat greater than the frequency of the exciting laser. In such an arrangement, the atom emits photons of a higher energy, with an emission preference in the direction of motion. This creates “recoil”, and the atom moves more slowly along the axis of the resonator. The absorption of photons occurs most profoundly when the atom moves against the laser beam. These slowing effects are due to the Doppler Effect.

For measurement of the storage period, the photons that are scattered in the resonator are counted. A few milliseconds after turning on the “light trap” the rate of counting accelerates significantly, because the atom between the mirrors is already relatively “hot”. Inside of 100 microseconds there is a condition of balance and the atom reaches its final temperature, just above absolute zero.

Captain Atom: The Fall and Rise of Captain Atom by Bates, Cary (paperback)