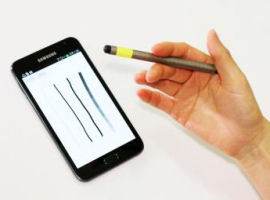 A magnetic pen-like wand that makes use of the magnetometers built into most smart phones and tablets adds a third dimension to device interaction, heralding a new generation of innovative games and applications. The MagPen device that works both on and around mobile devices was developed by researchers at the Korea Advanced Institute of Science and Technology.

The developers, Kwang-yun Wohn, Sungjae Hwang, and Andrea Bianchi, say that almost all mobile devices today have magnetometers that are used to provide compass functions. This means the MagPen requires no additional hardware, only an application that can analyze the magnetic fields produced by the permanent magnet in the MagPen.

Hwang said the MagPen detects the direction at which a stylus pen is pointing, recognizes pen-spinning gestures; and estimates the finger pressure applied to the pen. “The MagPen expands the scope of input gestures recognized by a stylus pen beyond its existing vocabularies of gestures and techniques such as titling, hovering, and varying pressures. The tip of the pen switches from a pointer to an eraser and vice versa when spinning. Or, it can choose the thickness of the lines drawn on a screen by spinning,” explained Wohn.

“It’s quite remarkable to see that the MagPen can understand spinning motion. It’s like the pen changes its living environment from two dimensions to three dimensions. This is the most creative characteristic of our technology,” added Hwang.

The research team will present a paper on the MagPen technology at the 15th International Conference on Human-Computer Interaction with Mobile Devices and Services to be held in Germany in August. In addition to the MagPen, Hwang and his team are developing different types of magnetic gadgets that include the “Magnetic Marionette,” a magnetic cover for a smart phone, which offers augmented interactions with the phone, as well as a range of “magnetic widgets.”