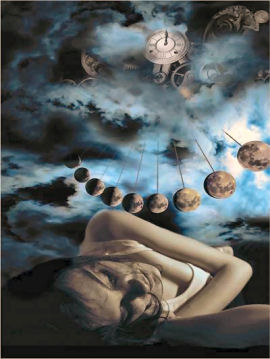 A report in Current Biology offers the first scientific evidence that humans are affected by the geophysical rhythms of the moon. “The lunar cycle seems to influence human sleep, even when one does not ‘see’ the moon and is not aware of the actual moon phase,” says report author Christian Cajochen, from the University of Basel.

For the study, Cajochen’s team of researchers worked with 33 volunteers whose brain patterns were monitored while sleeping, along with eye movements and hormone levels.

Intriguingly, the researchers observed that around the time of the full moon, brain activity related to deep sleep dropped by 30 percent. People also took five minutes longer to fall asleep, and they slept for twenty minutes less time overall. The study participants reported their sleep was poorer when the moon was full, and they showed diminished levels of melatonin, a hormone known to regulate sleep and wake cycles.

“This is the first reliable evidence that a lunar rhythm can modulate sleep structure in humans when measured under the highly controlled conditions of a circadian laboratory study protocol without time cues,” Cajochen said.

He speculates that this circalunar rhythm might be a relic from a distant past in which the moon may have synchronized human behaviors for reproductive or other purposes. This is well understood in other animals, especially marine creatures, where moon light coordinates reproduction behavior. “It could turn out that the moon has power over other aspects of our behavior as well, such as our cognitive performance and our moods,” Cajochen offered.

In the future, the researchers hope to look more deeply into the anatomical location of the circalunar clock and its molecular and neuronal underpinnings.

Related:
Discuss this article in our forum
Lack of sleep causing obesity epidemic?
Computer Games Zap Melatonin
Neuroscientists observe “novel” activity in brain during sleep
Earth to Moon on a cup of fuel