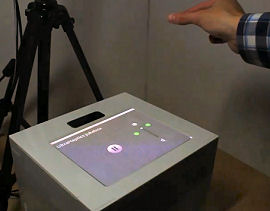 Using focused ultrasound radiation, scientists have created a human-computer interface that provides haptic (touch) feedback above a computer screen without having to touch or hold any device. The system, developed by University of Bristol (UK) researchers, will be unveiled this week at the ACM Symposium on User Interface Software and Technology in Scotland.

Co-developer Tom Carter said the technology, dubbed UltraHaptics, allows people to “feel” what is on the screen. “UltraHaptics uses the principle of acoustic radiation force where a phased array of ultrasonic transducers is used to exert forces on a target in mid-air,” he explained. “Haptic sensations are projected through a screen and directly onto the user’s hands.”

Carter claims that the system is capable of creating individual points of feedback that are far beyond the perception threshold of the human hand.

In tandem with the force-feedback system, the researchers have also established the necessary properties of a display surface that is transparent to the ultrasound radiation. “We have designed a system with an ultrasound transducer array positioned beneath an acoustically transparent display,” Carter said. “This arrangement allows the projection of focused ultrasound through the interactive surface and directly onto the users’ bare hands. By creating multiple simultaneous feedback points, and giving them individual tactile properties, users can receive localized feedback associated to their actions.”

So far, the researchers have explored three interaction possibilities: mid-air gestures, tactile information layers and visually restricted displays, and created an application for each.