You are here: Home › News › Cheap-and-cheerful spectrometer for cell phones
By Will Parker on October 8, 2010 in News 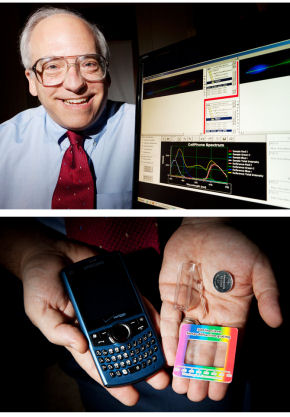 Scheeline firmly believes the ultra-cheap spectrometer will foster critical thinking in students. “Science is basically about using your senses to see things – it’s just that we’ve got so much technology that now it’s all hidden,” he explained. “The student gets the impression that a measurement is something that goes on inside a box and it’s completely inaccessible, not understandable – the purview of expert engineers. That’s not what you want them to learn. In order to get across the idea, ‘I can do it, and I can see it, and I can understand it,’ they’ve go to build the instrument themselves. ”

The limiting factor seemed to be in the light sensor, or photodetector, to capture the spectrum for analysis. “All of a sudden this light bulb went off in my head: a photodetector that everybody already has! Almost everybody has a cell phone, and almost all phones have a camera,” Scheeline said. “I realized, if you can get the picture into the computer, it’s only software that keeps you from building a cheap spectrophotometer.”

In the United States, Scheeline used cell-phone spectrometers in an Atlanta high school science program in the summers of 2009 and 2010. By the end of the 45-minute class, he was delighted to find students grasping chemistry concepts that seemed to elude students in similar programs using only textbooks. For example, one student inquired about the camera’s sensitivity to light in the room and how that might affect its ability to read the spectrum.

“And I said, ‘You’ve discovered a problem inherent in all spectrometers: stray light.’ I have been struggling ever since I started teaching to get across to university students the concept of stray light and what a problem it is, and here was a high school kid who picked it right up because it was in front of her face!” Scheeline said.

“The potential is here to make analytical chemistry a subject for the masses rather than something that is only done by specialists,” Scheeline said. “There’s no doubt that getting the cost of equipment down to the point where more people can afford them in the education system is a boon for everybody.”