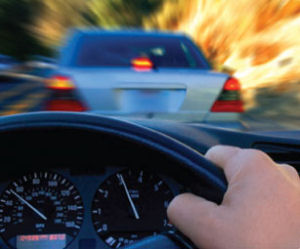 Most health and law enforcement agencies would agree that the effective early detection of drivers under the influence of alcohol would significantly reduce the number of fatal car accidents. To date, this has been only been possible by stopping individual vehicles and requiring the driver to breath into a device that measures the alcohol content of the driver’s breath.

Now, however, researchers at the Military University of Technology in Poland have shown that a relatively simple laser device can measure alcohol vapor levels in a movingvehicle. The research team, led by Jaros�aw Mlynczak, has had their work published in the Journal of Applied Remote Sensing.

Mlynczak envisages that the device would be deployed by the side of the road to monitor each car passing by. “If some vapors of alcohol are detected in a car, a message with a photo of the car including its number plate is sent to police who are waiting by the road several hundred meters further,” he explained. “Then the policeman stops the suspected car driver and checks him using conventional equipment. Sometimes it may occur that the driver is sober while passengers are not. However, despite this, it will surely decrease the number of cars that have to be [manually] checked by police and will increase efficacy of stopping drunken drivers.” 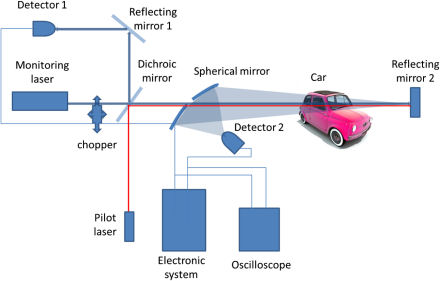 The device (illustration above) uses a single-mode laser beam with a wavelength of 3.39 um and power of 2 mW. The laser is placed on one side of the road and directed onto a reflective mirror placed on the other side of the road. An additional laser beam of 0.6 um wavelength was used as a pilot beam and was aligned with the monitoring beam with a dichroic mirror. To focus the monitoring beam returning from the car onto detector 2, a spherical mirror was used. The returning signals from the detectors were analyzed by a specially developed electronic system.

“Because the monitoring beam goes through the car two times, the absorption of the beam by the alcohol vapor is increased,” explained Mlynczak. “Additionally, the displacement of the beam by car windows was also eliminated. On the other hand, this solution caused the increase of absorption of the monitoring beam by the car windows; however, this was overcome by using detectors of high sensitivity.”

In a real situation, the alcohol vapor would come from human lungs, but in the experiment, the source was simulated. The simulation was created by the evaporation of a water solution of alcohol of appropriate concentration and at appropriate temperature.

Mlynczak said the results of the experiment showed that the device works effectively. He said it was able to detect alcohol vapor in a car in which a human being with a concentration of alcohol in the blood of at least 0.1 percent is present.

Mlynczak conceded that countermeasures, such as having the car windows open, could be employed by drivers to deceive the system. “However, such situations are very easily detected by the system, which sends this information to the policeman indicating that the car should be checked,” he said. “In case of driving with air-conditioning or fans on, the results of measurements will surely be distorted, but it depends on the speed of moving air, which usually is very low and, thus, its impact on the measurements is slight.”

Related:
Discuss this article in our forum
Wine drinkers clueless about alcohol servings
Alcohol rewires brain for PTSD
Multitasking: you’re bad at it
Bad driving may be genetic