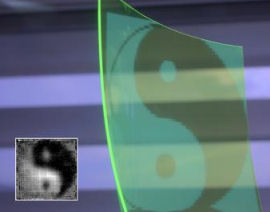 An Austrian research team has developed an entirely new way of capturing images based on a flat, flexible, transparent, and potentially disposable polymer sheet.

Resembling a flexible plastic film, the imager uses fluorescent particles to capture incoming light and channel a portion of it to an array of sensors around the edge of the sheet. With no electronics or internal components, the imager’s elegant design makes it ideal for a new breed of imaging technologies, including user interface devices that can respond not to a touch, but merely to a simple gesture. The new device and its possible applications are detailed in the journal Optics Express.

The sensor is based on a polymer film known as a luminescent concentrator (LC), which is suffused with tiny fluorescent particles that absorb a very specific wavelength (e.g. blue light) and then reemit it at a longer wavelength (e.g. green light). Some of the reemitted fluorescent light is scattered out of the imager, but a portion of it travels throughout the interior of the film to the outer edges, where arrays of optical sensors (much like a pinhole cameras) capture the light. A computer then combines the signals to create a gray-scale image. “With fluorescence, a portion of the light that is reemitted actually stays inside the film,” explained researcher Oliver Bimber of the Johannes Kepler University. “This is the basic principle of our sensor.”

For the luminescent concentrator to work as an imager, Bimber and his colleagues had to determine precisely where light was falling across the entire surface of the film. This was a major technical challenge as the polymer sheet cannot be divided into individual pixels like a CCD camera inside a smartphone. Instead, fluorescent light from all points across its surface travels to all the edge sensors. Calculating where each “bit” of light entered the imager would be like determining where along a subway line a passenger got on after the train reached its final destination and all the passengers exited at once.

The solution came from the phenomenon of light attenuation, or dimming, as it travels through the polymer. The longer it travels, the dimmer it becomes. So by measuring the relative brightness of light reaching the sensor array, it was possible to calculate where the light entered the film.

The researchers were able to scale up this basic principle by measuring how much light arrives from every direction at each position on the image sensor at the film’s edge. They could then reconstruct the image by using a technique similar to X-ray computed tomography, more commonly known as a CT scan.

“In CT technology, it’s impossible to reconstruct an image from a single measurement of X-ray attenuation along one scanning direction alone,” says Bimber. “With a multiple of these measurements taken at different positions and directions, however, this becomes possible. Our system works in the same way, but where CT uses X-rays, our technique uses visible light.”

Currently, the resolution from this image sensor is low (32×32 pixels), but the researchers are planning better prototypes to achieve a higher signal-to-noise ratio.

By applying advanced sampling techniques, the researchers can already enhance the resolution by reconstructing multiple images at different positions on the film. These positions differ by less than a single pixel (as determined by the final image, not the polymer itself). By having multiple of these slightly different images reconstructed, it’s possible to create a higher resolution image. “This does not require better photodiodes,” notes Bimber, “and does not make the sensor significantly slower. The more images we combine, the higher the final resolution is.”

The main application the researchers envisage is in touch-free, transparent user interfaces that could seamlessly overlay a television or other display technology. This would give computer operators or video-game players full gesture control without the need for cameras or other external motion-tracking devices. The polymer sheet could also be wrapped around objects to provide them with sensor capabilities. Since the material is transparent, it’s also possible to use multiple layers that each fluoresce at different wavelengths to capture color images.

The researchers also are considering attaching their new sensor in front of a regular, high-resolution CCD sensor. This would allow recording of two images at the same time at two different exposures. “Combining both would give us a high-resolution image with less overexposed or underexposed regions if scenes with a high dynamic range or contrast are captured,” Bimber suggests. He also notes that the polymer sheet portion of the device is relatively inexpensive and therefore disposable. “I think there are many applications for this sensor that we are not yet aware of.”

Medicos mull possible link between obesity and ADHD
Tweet this: human language may have evolved from birdsong