You are here: Home › News › Exoplanet Imager Takes Shape
By Will Parker on April 12, 2007 in News 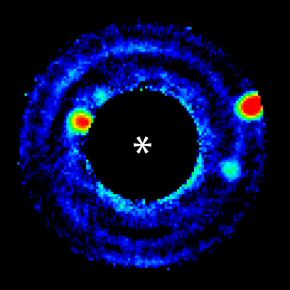 NASA researchers have customized a space telescope with special masks and mirrors which they believe could allow it to take photographs of planets orbiting other stars (exoplanets). Although the apparatus has only been demonstrated in the laboratory, the successful test marks a dramatic step forward for missions like the proposed Terrestrial Planet Finder, designed to hunt for an Earth twin that might harbor life.

While detecting exoplanets is relatively easy, actually photographing them is very difficult, thanks to their feeble light being swamped by other light sources over the massive distances involved. The task has been compared to looking for a firefly next to a searchlight.

But two NASA researchers have shown that a fairly simple coronagraph – an instrument used to “mask” a star’s glare – paired with an adjustable mirror, could enable a space telescope to image a distant planet 10 billion times fainter than its central star. The new system, dubbed the High Contrast and Imaging Testbed, overcomes two significant hurdles that all telescopes face when trying to image exoplanets – diffracted and scattered light. Detailing the work in Nature, NASA’s John Trauger said that the new technique was; “at least a thousand times better than anything demonstrated previously.”

Trauger explained that when starlight hits the edge of a telescope’s primary mirror, it becomes slightly disturbed, producing a pattern of rings or spikes surrounding the major source of light in the focused image. This diffracted light can completely obscure any planets in the field of view. To address this problem, Trauger and his colleagues fashioned a pair of masks for their system. The first, which resembles a blurry barcode, directly blocks most of the starlight, while the second clears away the diffracted rings and spikes.

The combination creates enough darkness to allow the light of any planets to shine through. “Mathematically, and sort of magically, this coronagraph blocks both the central star and its rings,” said Wesley Traub, co-author of the new paper.

The other hurdle – scattered light – is addressed with a deformable mirror the size of a large coin that limits scattered light. With a surface that can be altered by computer-controlled actuators, this mirror compensates for the effects of minor imperfections in the telescope.

“This points the way to building a space telescope with the ability to detect and characterize Earth-like planets around nearby stars,” Traub said, adding that the team now plan to extend the method to accommodate many wavelengths of light simultaneously.