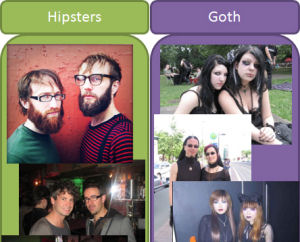 Social networks like Facebook may soon be able to tell which urban tribe you belong to. University of California, San Diego computer scientists are developing an algorithm that uses group pictures to determine whether you’re a hipster, Goth, biker, or surfer. So far, the algorithm is about 5 times more accurate than chance, but the researchers think they can get it to perform at least as well as a human.

Researcher Serge Belongie said identifying urban tribes is surprisingly difficult for computers. To tackle the task, Belongie’s team worked with pictures of the eight most popular subcultures: biker, country, Goth, heavy metal, hip hop, hipster, raver, and surfer. One of the team’s insights was to analyze group pictures rather than pictures of individuals. They hoped that this would make it easier to pick up social cues – such as clothing and hairdos – to determine people’s tribes based on visuals featuring more than one person.

Specifically, the algorithm segments each person into six sections – face, head, top of the head (where a hat would be), neck, torso, and arms. The algorithm then analyzes the picture as the sum of its parts and attributes – in this case haircuts, hair color, make up, jewelry, and tattoos. The algorithm also analyzes the sections for color, texture and other factors.

After training the algorithm with labeled pictures, the program could accurately determine the urban tribe 48 percent of the time – a result significantly better than random (9 percent). 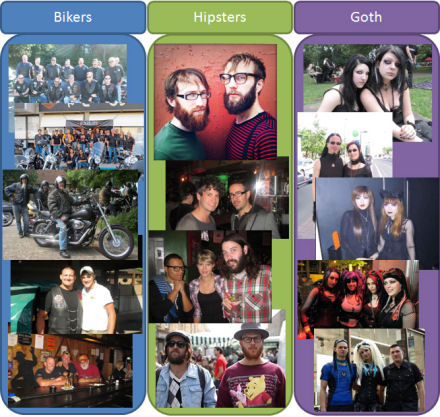 The team’s work will likely have a wide range of applications, from generating more relevant search results and advertisements, to allowing networks like Facebook to provide better recommendations and content. There also is a growing interest in analyzing footage from CCTV cameras in public spaces to identify groups rather than individuals. “This is a first step,” concluded Belongie. “We are scratching the surface to figure out what the signals are.”