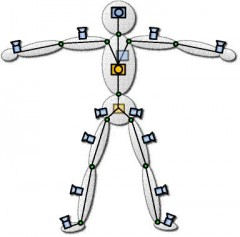 Current motion capture techniques use cameras to meticulously record the movements of actors inside studios, enabling those movements to be mapped onto digital models. Now, a new system which places the cameras on the actors themselves permits motion capture to occur almost anywhere.

The scientists at Disney Research and Carnegie Mellon University who developed the new technique say that the body-mounted cameras enable the capture of motions that would be difficult – if not impossible – via the traditional studio-based method.

“This could be the future of motion capture,” said Disney’s Takaaki Shiratori. “As video cameras become ever smaller and cheaper, I think anyone will be able to do motion capture in the not-so-distant future.”

The wearable camera system makes it possible to reconstruct the relative and global motions of an actor thanks to a process called “structure from motion” (SfM). SfM was developed 20 years ago as a means of determining the three-dimensional structure of an object by analyzing the images from a camera as it moves around the object. In this application, however, SfM is turned inside out and used to estimate the pose of the cameras on the person.

The researchers used Velcro to mount 20 lightweight cameras on the limbs and trunk of each subject. Each camera was calibrated with respect to a reference structure. Each person then performed a range-of-motion exercise that allowed the system to automatically build a digital skeleton and estimate positions of cameras with respect to that skeleton.

SfM is used to estimate position and orientation of limbs as the actor moves through an environment and to collect 3D information about the environment that can provide context for the captured motion. A refinement step then optimizes the configuration of the body and its location in the environment, resulting in the final motion capture result.

The quality of motion capture from body-mounted cameras does not yet match the fidelity of traditional motion capture, Shiratori said, but will improve as the resolution of small video cameras continues to improve.

The new technique requires a significant amount of computational power; a minute of motion capture now can require an entire day to process. Future work will include efforts to find computational shortcuts, such as through parallel processing.

Related:
This is your brain on androids
Transform! Origami robots self-fold
Context And Computer Vision