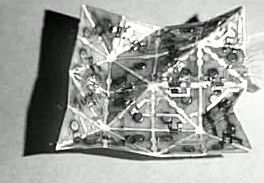 Researchers at Harvard and MIT have demonstrated what they call “programmable matter by folding” using a single thin sheet composed of interconnected triangular sections that can transform itself into a boat or plane shape.

“The process begins when we first create an algorithm for folding,” explains Harvard’s Robert Wood. “Similar to a set of instructions in an origami book, we determine, based upon the desired end shapes, where to crease the sheet.”

The sheet is composed of a thin composite of rigid tiles and elastomer joints that is studded with thin foil actuators and flexible electronics. A shape is produced by triggering the proper actuator groups in sequence.

To transform the sheet, the team devised a series of stickers that contain the circuitry to prompt the actuators to make the folds. This can be done without a user having to access a computer, reducing “programming” to merely placing the stickers in the appropriate places.

“Smart sheets are origami robots that will make any shape on demand for their user,” said MIT co-researcher Daniela Rus. “A big achievement was discovering the theoretical foundations and universality of folding and fold planning, which provide the brain and the decision making system for the smart sheet.”

While the researchers only demonstrated two simple shapes, the proof of concept holds promise. The long-term aim is to make programmable matter more robust and practical, leading to materials that can perform multiple tasks. “The shape-shifting sheets demonstrate an end-to-end process that is a first step towards making everyday objects whose mechanical properties can be programmed,” concluded Wood.

Related:
Watch a video of the transformer-like material
Super Strong Artificial Muscles Could Power Next Generation Of Robots
Novel Robot Will Be “Dynamic And Graceful,” Says Prof
Bionics: The Six Million Dollar Question