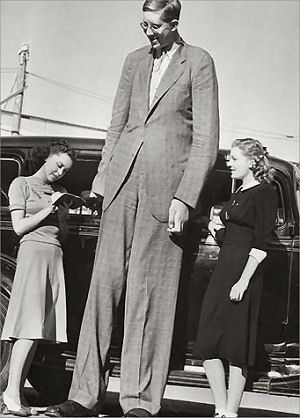 Shorter men live longer, according to new research that shows shorter men were more likely to have a protective form of the longevity gene, FOXO3, leading to smaller body size during early development, lower blood insulin levels, and less cancer.

“We split people into two groups – those that were 5-foot-2 and shorter, and 5-4 and taller,” said Dr. Bradley Willcox, one of the investigators for the study and a Professor in the University of Hawaii. “The folks that were 5-2 and shorter lived the longest. The range was seen all the way across from being 5-foot tall to 6-foot tall. The taller you got, the shorter you lived.”

The new study used data from the Kuakini Honolulu Heart Program begun in 1965. That study has tracked more than 8,000 American men of Japanese ancestry born between the years 1900 and 1919. The Kuakini HHP is the only longitudinal study of Japanese-American men that has included epidemiological and clinical data of the cohorts for almost 50 years.

Published in PLOS ONE, the new longevity study highlighted the importance of theFOXO3 gene. “This study shows for the first time, that body size is linked to this gene,” said Willcox. “We knew that in animal models of aging. We did not know that in humans. We have the same or a slightly different version in mice, roundworms, flies, even yeast has a version of this gene, and it’s important in longevity across all these species.”

Dr. Willcox noted that there is no specific height or age range that should be targeted as a cut-off in the study, in part because “no matter how tall you are, you can still live a healthy lifestyle” to offset having a typical FOXO3 genotype rather than the longevity-enhancing form of the FOXO3 gene.

Related:
Discuss this article in our forum
Short Boys More Likely To Be Kept Back At School
Age-related height loss linked to cognitive health
U.S. heads getting bigger
Family Of Giants Serves As A Living Laboratory On Dwarfism

New type of avian flu found in Antarctic penguins
The War on Drugs in 10,000 B.C.