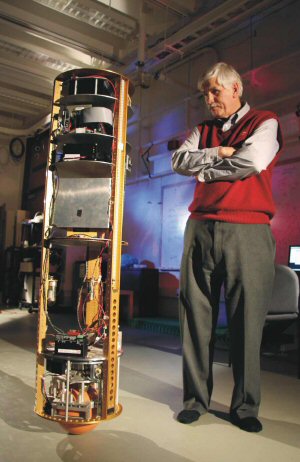 Researchers at Carnegie Mellon University have put together a new type of robot – dubbed “Ballbot” – that balances and moves on a single large ball, rather than legs or wheels. Created by Carnegie robotics boffin Ralph Hollis, Ballbot is a self-contained, battery-operated, omnidirectional robot that balances dynamically on a single urethane-coated metal sphere. Ballbot weighs 95 pounds and is the approximate height and width of a person. Because of its long, thin shape and ability to maneuver in tight spaces, Hollis says Ballbot has the potential to function and interact with people much more effectively than other types of robot.

In the past, statically stable mobile robots have had three or more wheels for support, but their bases are generally too wide to move easily among people. They can also tip over if they move too fast or operate on a slope. “We wanted to create a robot that can maneuver easily and is tall enough to look you in the eye,” Hollis said. “Ballbot is tall and skinny, with a much higher center of gravity than traditional wheeled robots [and] because it is omnidirectional, it can move easily in any direction without having to turn first.”

Ballbot has an onboard computer that reads balance information from its internal sensors, activating rollers that mobilize the ball on which it moves – something akin to how a mouse-ball moves. Hollis believes Ballbot provides an alternative to not only multi-wheeled robots, but also legged robots, which he says are complex and expensive.

Hollis and his team have demonstrated Ballbot moving on carpeted surfaces and future plans include adding a head and a pair of arms. Swinging the arms, said Hollis, would help to rotate and balance the body. “We want to make Ballbot much faster, more dynamic and graceful,” he said. “But there are many hurdles to overcome, like responding to unplanned contact with its surroundings, planning motion in cluttered spaces and safety issues.”

Hollis has been a pioneer in the field of mobile robots since he began building them as a hobby in the 1950s – well before there were personal computers or easily accessible off-the-shelf parts. In the 1960s, he developed one of the world’s first mobile robots and followed that in the 1970s with the Newt mobile robot, which was one of the first to have an onboard computer. He served as manager of advanced robotics in IBM’s Manufacturing Research Department from 1986 to 1993, when he accepted a position as a senior research scientist at Carnegie Mellon’s Robotics Institute. “When I started building robots, the field didn’t even exist,” said Hollis. “Now the field has grown up around me and I’m in the middle of it. It’s like a dream come true.”

Check out the Ballbot page at CM for more info and some videos!

The Handbook of Formal Methods in Human-Computer Interaction 3566