You are here: Home › News › Evidence of “Memory” In Molecular Interactions
By Will Parker on November 1, 2007 in News 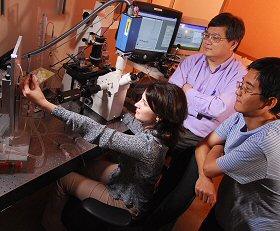 Evidence has been uncovered that some molecular interactions on cell surfaces may have a “memory” that affects their future interactions. The intriguing new findings, reported in the Proceedings of the National Academy of Sciences could lead to a re-examination of previous results from single-molecule research.

In the past, researchers using sequentially repeated tests to obtain statistical samples of molecular properties assumed that each test was identical to – and independent of – any other tests in the sequence. But in the new study, researchers at the Georgia Institute of Technology provide examples of test sequences that may not be composed of independent and identically-distributed (i.i.d) random variables.

“If you are probing a cell to get a bit of information, how do you know that the cell is not going to respond by changing the information it reveals the next time you probe it?” asked Cheng Zhu, a Regents’ Professor in the Coulter Department of Biomedical Engineering at Georgia Tech. “If you are probing a molecule, can you assume that the molecule will return to its original configuration before you test it the next time? We didn’t think about this until we had been doing these kinds of experiments for more than ten years.”

Zhu’s research demonstrates that certain cells can “remember” their earlier encounters through specific receptor-ligand interactions. That would mean that some sequential measurements may not have been truly independent, and could therefore prompt re-examination of some research that obtained data under the i.i.d assumption. “People doing research in this area ought to look at what we have found,” Zhu said. “They may discover new aspects that may have been overlooked.”

Using a micropipette adhesion frequency assay, Zhu’s research team studied a number of receptor-ligand interactions. The sequence data analysis, conducted by co-researcher Veronika Zarnitsyna, revealed examples in which an interaction observed in one test affected the outcome of a future test. Depending on the biological system, the effect could either increase or decrease the likelihood of a future interaction.

Zhu compares the negative correlation to the effects of strong light on the eyes. “If you go from the dark to the bright, time is required before you can see well again,” he noted. “Exposure to strong light temporarily inhibits the eyes’ response to the next input.”

As a next step, Zhu would like to further characterize the memory effect to determine how long it lasts. “It seems reasonable that if you prolong the cycle time – the period between trials – the cell or molecule would gradually forget,” he said. He would also like to study the biological mechanisms of the memory effects.

“We believe this phenomenon may be biologically important, though we don’t yet know the implications for it,” Zhu said. “This may represent a way for cells to regulate their adhesion and signaling. For T cells, the ability to ‘remember’ even a brief interaction with a pathogen may be related to their ability to tell an intruder from “self” molecules, which is crucial to the body’s defense in the immune system.”

Related articles:
Getting Physical With Molecules
New Sorting Algorithm Aims To Sift Through All Possible Molecules

When A Bad Fit Improves Accuracy