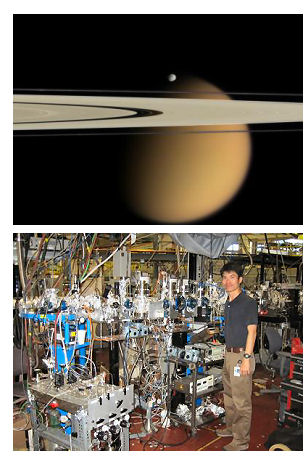 Replicating the atmosphere of Titan and blasting it with UV light has allowed University of Arizona researchers to create organic macromolecules that they think are a model for the chemistry of pre-life Earth.

Earth and Titan are the only known planetary-sized bodies that have thick, predominantly nitrogen atmospheres. “Titan is so interesting because its nitrogen-dominated atmosphere and organic chemistry might give us a clue to the origin of life on our Earth,” said Hiroshi Imanaka (pictured), who conducted the research. “Nitrogen is an essential element of life.”

However, not just any nitrogen will do. Nitrogen gas must be converted to a more chemically active form of nitrogen that can drive the reactions that form the basis of biological systems. This is what the researchers were looking to create.

Imanaka and co-researcher Mark Smith converted a nitrogen-methane gas mixture similar to Titan’s atmosphere into a collection of nitrogen-containing organic molecules by irradiating the gas with high-energy UV rays. The laboratory set-up was designed to mimic how solar radiation affects Titan’s atmosphere. Surprisingly, most of the nitrogen moved directly into solid compounds, rather than gaseous ones. Previous models predicted the nitrogen would move from gaseous compounds to solid ones in a lengthier stepwise process.

At the beginning of the experiment, the researchers only analyzed the resultant gases and didn’t detect any nitrogen-containing organic compounds. Imanaka and Smith thought there was something wrong in the experimental set-up, so they tweaked the system. But still no nitrogen. “It was quite a mystery,” said Imanaka. “Where did the nitrogen go?”

Finally, the two researchers collected the bits of brown gunk that gathered on the container wall and analyzed it. “[We] finally found the nitrogen!” boasted Imanaka. Imanaka and Smith suspect that such compounds are formed in Titan’s upper atmosphere and eventually fall to Titan’s surface. And, once on the surface, they could contribute to an environment that is conducive to the evolution of life.

Titan looks orange in color because a smog of organic molecules envelops the planet. The particles in the smog will eventually settle down to the surface and may be exposed to conditions that could create life, according to Imanaka. “If some of the particles are the same nitrogen-containing organic molecules [we] created in the laboratory, conditions conducive to life are more likely,” Smith said.