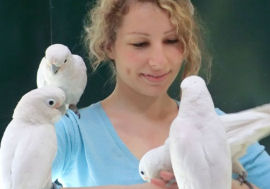 The ability to anticipate a delayed gain is considered cognitively challenging since it requires not only the capacity to control a direct impulse, but also to assess the gain’s beneficial value relative to the costs associated with having to wait.

Such abilities were believed to be restricted to a few large brained animals until recent experiments at the University of Vienna revealed the Goffin cockatoo to be an extremely sophisticated trader with impressive self-control. The new work, appearing in the journal Biology Letters, follows on from other experiments at the University of Vienna that showed the Goffin to be a clever tool innovator.

Back in the 70s, self-control in human infants was investigated in the “Stanford Marshmallow Experiment.” Children were presented with a marshmallow and were told they could either eat it immediately, or wait and receive a second one if the first one was still intact after a delay of several minutes. Interestingly, the children that were able to wait for the delayed reward recorded greater success in later life than the ones that ate the first marshmallow straight away. Anticipating a delayed gain can be considered a precursor of economic decision making and is rarely found outside humans. 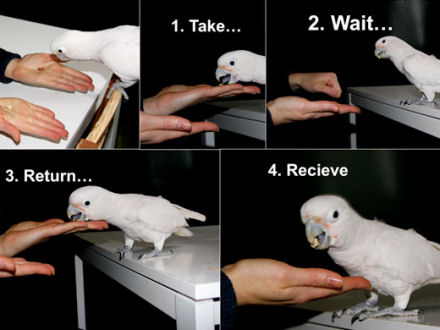 In the new experiment, the cockatoos were allowed to pick up an initial food item and then given the opportunity to return it into the experimenter’s hand after an increasing time delay. “If the initial food item had not been nibbled, the bird received another reward of an even more preferred food type or of a larger quantity than the initial food,” explained researcher Isabelle Laumer (pictured, top of page). “We picked pecan nuts as an initial reward as they are highly liked by the birds and would under normal circumstances be consumed straight away, [but] we found that all 14 of the birds waited for food of higher quality – such as a cashew nut – for up to 80 seconds.”

Lead researcher Alice Auersperg says that when exchanging for better qualities, the Goffins acted astonishingly like economic agents, flexibly trading-off between immediate and future benefits. “They did so, relative not only to the length of delay, but also to the difference in trade value between the ‘currency’ and the ‘merchandise,’ tending to trade their initial items more often for their most preferred food, than for one of intermediate preference value,” she noted.

Importantly, the birds did not exchange in a control experiment in which the value of the initial item was higher than that of the expected one.

Auersperg thinks the results are even more striking given that the birds have to hold the food in their beaks without eating it. “While human infants or primates can hold the initial food in their hands, one should also consider that the birds were able to wait, although they had to hold the food in their beaks, directly against their taste organs while waiting. Imagine placing a cookie directly into a toddler’s mouth and telling her she will only receive a piece of chocolate if the cookie is not nibbled for a minute.”