You are here: Home › Animal Kingdom › News › Cockatoo makes his own tools
By Will Parker on November 6, 2012 in Animal Kingdom, News 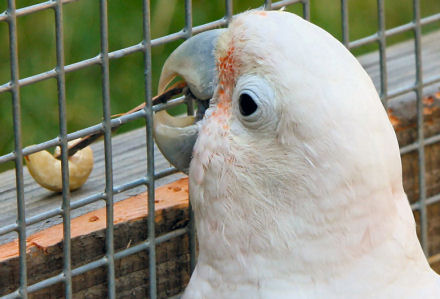 A Goffin’s cockatoo (Cacatua goffiniana) named Figaro has been observed spontaneously making and using tools for reaching food and other objects. Figaro, who lives in Vienna, was reared in captivity and animal behaviorists are unclear as to how he acquired his DIY skills. The researchers that documented his tool making abilities, from the Universities of Oxford and Vienna, have published their observations in the journal Current Biology.

“During our daily observation protocols, Figaro was playing with a small stone. At some point he inserted the pebble through the cage mesh, and it fell just outside his reach. After some unsuccessful attempts to reach it with his claw, he fetched a small stick and started fishing for his toy,” said study leader Dr Alice Auersperg, of the University of Vienna.

To investigate further, the researchers placed a nut where the pebble had been. To their astonishment, Figaro did not go on searching for a stick but started biting a large splinter out of the aviary beam. “He cut it when it was just the appropriate size and shape to serve as a raking tool to obtain the nut,” said Auersperg.

Goffin’s cockatoos are not known to use tools in the wild, so the researchers were very surprised to see him fashion his own custom tool. From that time on, Figaro was successful in obtaining the nut every time the researchers placed it there, each time making new tools. “On one attempt he used an alternative solution, breaking a side arm off a branch and modifying the leftover piece to the appropriate size for raking,” noted Auersperg.

“Figaro shows us that, even when they are not habitual tool-users, members of a species that are curious, good problem-solvers, and large-brained, can sculpt tools out of a shapeless source material to fulfil a novel need,” added Professor Alex Kacelnik, of Oxford University.

Figaro is unique in his species (and among parrots, generally) in showing this do-it-yourself capacity, according to the researchers. Importantly, they note, after making and using his first tool, Figaro seemed to know exactly what to do, and showed no hesitation in later trials. They speculate that tool craftsmanship can emerge from intelligence not-specialized for tool use.

Kacelnik had previously led studies in the natural tool-using New Caledonian crows. One of them, named Betty, surprised scientists by fashioning hooks out of wire to retrieve food that was out of reach. This species use and make tools in the wild but there was no precedent for Betty’s form of hook making. “Her case is still considered as a striking example of individual creativity and innovation, and Figaro seems ready to join her,” said Kacelnik. “We confess to be still struggling to identify the cognitive operations that make these deeds possible. Figaro, and his predecessor Betty, may help us unlock many unknowns in the evolution of intelligence.”