You are here: Home › Climate Change › News › Sea-level rise predictions may be missing critical factors
By Will Parker on November 5, 2012 in Climate Change, News 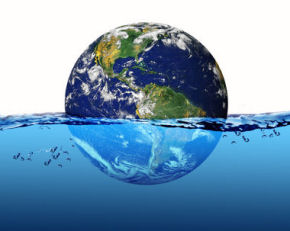 Sea levels are rising faster than the Intergovernmental Panel on Climate Change (IPCC) predicted and new work presented at a meeting of The Geological Society of America suggests that previously ignored climate feedbacks, such as groundwater use, are to blame.

The last official IPCC report in 2007 projected a global sea level rise of 0.2 – 0.5 meters by the year 2100. But sea-level rise measurements meet or exceed the high end of that range already, and revised estimates indicate a rise of one meter or more by 2100.

University of Colorado geologist Bill Hay, who presented his work at the meeting yesterday, believes what’s missing from the models are critical feedbacks that speed everything up. According to Hay, the chief culprits are Arctic sea ice, the Greenland and Antarctic ice caps, and groundwater mining.

“There is an Arctic sea ice connection,” explained Hay. “Melting sea ice – which is already in the ocean – does not itself raise sea level. Instead, it plays a role in the overall warming of the Arctic, which leads to ice losses in nearby Greenland and northern Canada. When sea ice melts there is an oceanographic effect of releasing more fresh water from the Arctic, which is then replaced by inflows of brinier, warmer water from the south.”

This, says Hay, acts as a heat pump that brings warmth to the Arctic and creates more ice-free waters, which absorb sunlight rather than reflect it back into space as ice does. The more open water there is, he explains, the more heat is trapped in the Arctic waters, and the warmer things get. “That’s not in any of the models,” he warns.

Hay also contends the melt rate at which the massive stores of ice in Greenland and Antarctica might increase sea level as being vastly underestimated. “During the last interglacial period, sea level rose 10 meters due to the melting of all that ice – without any help from humans. New data suggests that the sea-level rise in the oceans then took place over a few centuries,” says Hay. “There’s no telling how fast it can go with this spike of carbon dioxide we are adding to the atmosphere.”

An unknown factor in this, he explains, is the lubricating effect of water under the ice sheets, which appears to accelerate the movement of the ice. “Ten years ago we didn’t know much about water under the Antarctic ice cap. But it is there, and it allows the ice to move – in some places even uphill due to the weight of the ice above it. It’s being squeezed like toothpaste out of a tube,” explains Hay.

Another feedback, he argues, is the groundwater being mined all over the planet which is ultimately added to the oceans. All of these are positive feedbacks speeding up the changes in climate and sea-level rise, he says.

“You would expect negative feedbacks to creep in at some point, but in climate change, every feedback seems to go positive,” he warns. “The reason is that Earth’s climate seems to have certain stable states. Between those states things are unstable and can change quickly. Under human prodding, the system wants to go into a new climate state.”