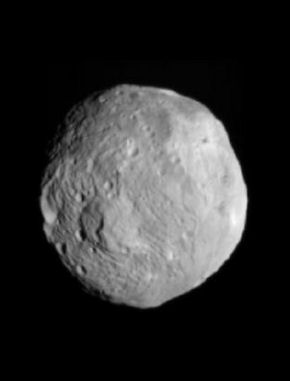 Paleoclimate studies, where scientists look into the past to try and understand changes in Earth’s climate, may be a waste of time if astronomers are correct in their theory that relatively minor bodies like the asteroid Vesta can cause chaotic fluctuations in Earth’s orbit. NASA’s Dawn space-probe flew by Vesta last Saturday.

The journal Astronomy & Astrophysics has published numerical simulations of the long-term evolution of the orbits of Ceres and Vesta, which are the largest bodies in the asteroid belt. Although Ceres and Vesta are relatively small (Ceres is only 1/80th the mass of the Moon and Vesta is around 1/300th the mass of the moon), the calculations show that they can exert a disproportionate effect on their large neighbors and, in particular, the Earth. The computations were compiled by French astronomer Jacques Laskar, from the Observatoire de Paris, and his co-researchers.

The new calculations show that Ceres and Vesta gravitationally interact with themselves and with the other planets of the solar system. Because of these interactions, they are continuously pulled or pushed slightly out of their initial orbit. The calculations show that, over time, these effects do not average out. Consequently, their orbits are chaotic, meaning that we cannot predict their positions over long periods.

According to the figures, Ceres and Vesta’s interactions with the Earth cause our planet’s orbit to become unpredictable after only 60 million years. This means that the Earth’s eccentricity, which can cause major climatic variations, cannot be traced back more than 60 million years. This calls into question all Paleoclimate studies that seek to look back further than this point.