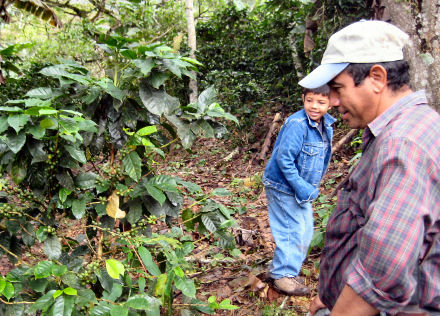 Scientists who have predicted the possible extinction of wild Arabica coffee (Coffea Arabica) within 70 years say urgent conservation measures are needed to future-proof Arabica’s genetic diversity and ensure the long-term sustainability of Arabica coffee production. The new insights into the second most traded commodity after oil have been compiled by scientists in the UK and Ethiopia and appear in the journal PLOS ONE.

The central issue, say the researchers, is that the Arabicas grown in the world’s coffee plantations are from very limited genetic stock and are unlikely to have the flexibility required to cope with climate change and other threats, such as pests and diseases. Recent studies have confirmed the climate sensitivity of Arabica and support the widely reported assumption that climate change will have a damaging impact on commercial coffee production worldwide.

The study, which uses computer modeling, represents the first of its kind for wild Arabica coffee. Surprisingly, modeling the influence of climate change on naturally occurring populations of any coffee species has never been undertaken before.

The researchers used field study and “museum” data (including herbarium specimens) to run bioclimatic models for wild Arabica coffee, in order to deduce the actual (recorded) and predicted geographical distribution for the species. The distribution was then modeled through time until 2080 using three different emission scenarios. Ultimately, the models showed a profoundly negative influence on the number and extent of wild Arabica populations. The worst case scenario, drawn from the analyses, is that wild Arabica will be extinct by 2080.

The researchers say the predicted reduction in the number of wild Arabica localities, between 65 percent and 100 percent, can be taken as a general assessment of the species’ survival as a whole, given the scope and coverage of the data and analyses used in the study. They stress, however, that the predictions are regarded as conservative, as the modeling does not factor in the large-scale deforestation that has occurred in the highland forests of Ethiopia and South Sudan.

Other factors, such as pests and diseases, changes in flowering times, and a possible reduction in the number of birds (which disperse the coffee seeds), are not included in the modeling, and these, suggests the study, are likely to have a compounding negative influence.

The outcome of climate change in Ethiopia for cultivated Arabica, the only coffee grown in the country, is also assumed to be profoundly negative, as natural populations, forest coffee (semi-domesticated) and some plantations occur in the same general bioclimatic area as indigenous Arabica. Generally, the results of the study indicate that Arabica is a climate sensitive species, which supports previously recorded data, various reports, and anecdotal information from coffee farmers. The logical conclusion is that Arabica coffee production is, and will continue to be, strongly influenced by accelerated climate change, and that in most cases the outcome will be negative for the coffee industry.

The study notes that in many areas of Ethiopia loss of habitat due to deforestation might pose a more serious threat to the survival of Arabica, although the findings indicate that even if a forest area is well protected, climate change alone could lead to extinction in certain locations.

The researchers hope their work will form the basis for developing strategies for the survival of Arabica in the wild. They identify a number of core sites which might be able to sustain wild populations of Arabica throughout this century, serving as long-term in situstorehouses for coffee genetic resources. The study also identifies populations that require immediate conservation action, including collection and storage at more favorable sites (for example in seed banks and living collections).

“Coffee plays an important role in supporting livelihoods and generating income, and has become part of our modern society and culture. The extinction of Arabica coffee is a startling and worrying prospect… The scale of the predictions is certainly cause for concern,” concluded Aaron Davis, the Head of Coffee Research at the Royal Botanic Gardens (Kew, UK).

Related:
Discuss this article in our forum
Mechanism behind caffeine withdrawal revealed
Yes, We Have No Bananas
Last ditch appeal to save irreplaceable seed bank from bulldozers