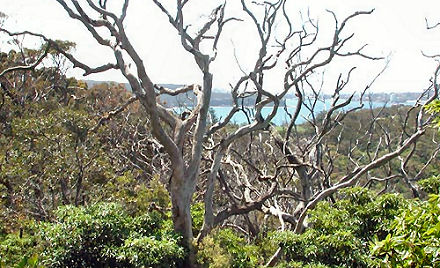 The hydraulic system of trees is so finely-tuned that predicted increases in drought due to climate change may lead to catastrophic failure in many species. That’s according to a new study that found many plants around the globe are already operating at the top of their drought-stress safety threshold. The new work is based on analyses of existing measures of plant hydraulic safety thresholds in forest species around the world. It was conducted by researchers from the U.S., Germany, and Australia and appears in the journal Nature.

Study co-author Amy Zanne, from George Washington University, said that drought is one of the major forces that shapes forests. “Over the last century, drought has been responsible globally for numerous large-scale forest diebacks. To make effective predictions of how forest landscapes may change in the future, we need to first understand how plants work,” she explained.

The primary challenge plants face during drought is how to keep their plumbing working. Drought stress creates trapped gas emboli in the water system, which reduces the ability of plants to supply water to leaves for photosynthetic gas exchange and can ultimately result in desiccation and death.

“Vulnerability to embolism is one of the main factors determining drought effects on trees,” Zanne says. “However, plants vary dramatically in their resistance to drought-induced embolism, which has made predictions of how forests might be altered under future climates more difficult.”

A surprising fact that the group discovered is that while plants vary greatly in their embolism resistance, they are sitting at similar safety thresholds across all forest types. The team found these thresholds are largely independent of mean annual precipitation. This, said Zanne, explains why drought-induced forest decline occurs in arid as well as wet forests, which had historically not been considered at risk.