You are here: Home › News › Rosetta anomaly stumps scientists
By Will Parker on November 13, 2009 in News 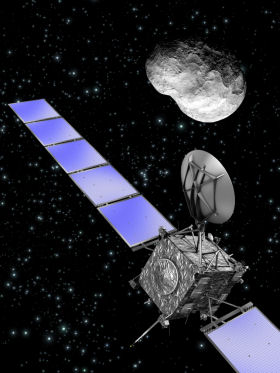 When the European Space Agency’s (ESA) Rosetta spacecraft swings by Earth tomorrow for a critical gravity assist, orbital data will be collected that could help unravel a cosmic mystery that has stumped scientists for two decades. Since 1990, scientists have noticed that their spacecraft sometimes experience a strange variation in the amount of orbital energy they exchange with Earth during planetary swing-bys. The unexplained variation is noticed as a tiny difference in speed compared to what is predicted by fundamental physics.

ESA scientists said that the unexplained speed variations are extremely small: NASA’s Galileo satellite experienced an increase of just 3.9 mm/s above the expected value when it swung past Earth in December 1990. The largest unexpected variation – a boost of 13.0 mm/s – was observed with NASA’s NEAR spacecraft at its Earth swing-by in January 1998. NASA’s Pioneer 10 and 11 spacecraft are also showing flight path anomalies.

Rosetta has made two previous Earth swing-bys, in 2005 and 2007. Frustratingly, it sped up by an unexplained 1.8 mm/s during the first passage, but experienced no slowing or speeding in 2007. No one knows what will happen on 13 November 2009 for Rosetta’s third and last Earth swing-by. “It’s a mystery as to what is happening with these gravity events. Some studies have looked for answers in new interpretations of current physics. If this proves correct, it would be absolutely ground-breaking news,” says Trevor Morley, lead flight dynamics specialist at ESA.

Scientists have floated a number of different explanations for the anomalies. These range from tidal effects peculiar to the near-Earth environment, atmospheric drag, or the pressure of radiation emitted or reflected by the Earth, to much more extreme possibilities, such as dark matter, dark energy or previously unseen variations in General Relativity. One American research team, led by ex-NASA scientist John Anderson, is even looking at the possibility that Earth’s rotation may be distorting space-time more than expected, thus affecting passing spacecraft.

The tracking activity gathered today will generate highly precise data that will record whether the spacecraft speeds up or slows down more or less than expected. Deep space ground stations operated by NASA, at Canberra, Australia, and Goldstone, California, will also observe the spacecraft before and after closest approach. “We are using as many ground stations as are available to maximize the amount of swing-by data we record. The more data we get, the better the chance that we may eventually come up with an answer,” said Morley.