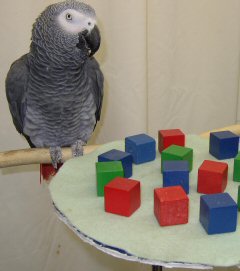 The walnut sized brain of the African grey parrot may actually be capable of comprehending abstract mathematical concepts. The bird seems to understand a numerical concept akin to zero – an abstract notion that humans don’t typically understand until they are three or four years old. Alex, the 28-year-old parrot who lives in a Brandeis University lab run by cognitive scientist Dr. Irene Pepperberg, spontaneously and correctly used the label “none” during a testing session of his counting skills to describe an absence of a numerical quantity on a tray. This discovery prompted a series of trials in which Alex consistently demonstrated the ability to identify zero quantity by saying the label “none.”

The findings, published in The Journal of Comparative Psychology, add to a growing body of scientific evidence that the avian brain, though quite different from the mammalian cortex, is capable of higher cognitive processing than previously thought. The use of “zero” to label a null set has not always been obvious even in human cultures, which in many cases lacked a formal term for zero as recently as the late Middle Ages. While chimpanzees show some understanding of the concept of zero, Alex is the first bird to demonstrate an understanding of the absence of a numerical set, Pepperberg wrote.

Pepperberg was quick to dispel any notions that the behavior was the result purely of training. “It is doubtful that Alex’s achievement, or those of some other animals such as chimps, can be completely trained; rather, it seems likely that these skills are based on simpler cognitive abilities they need for survival, such as recognition of more versus less,” she explained. “Alex has a zero-like concept; it’s not identical to ours but he repeatedly showed us that he understands an absence of quantity.”

Pepperberg’s research holds promise for teaching autistic and other learning-disabled children who have difficulty learning language, numerical concepts and even empathy. “This kind of research is changing the way we think about birds and intelligence, but it also helps us break down barriers to learning in humans,” concluded Pepperberg.