You are here: Home › Animal Kingdom › News › Bird poo and manta rays: nature’s intricate connectivity revealed
By Will Parker on May 19, 2012 in Animal Kingdom, News 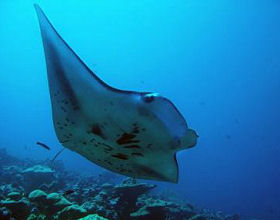 One of the longest ecological interaction chains ever documented sheds light on how human disturbance of the natural world may lead to widespread, yet largely invisible, disruption of ecosystems. The research, by Stanford scientists Douglas McCauley and Paul DeSalles, appears in the journal Scientific Reports.

McCauley and DeSalles were working around the remote Palmyra Atoll in the Pacific, tracking manta rays’ movements for a predator-prey interaction study. Swimming with the rays and charting their movements with tags, they observed that the creatures kept returning to certain islands’ coastlines. Meanwhile, another Stanford researcher, Hillary Young, was studying non-native palm tree cultivation projects along the coastline in an effort to understand the impact on bird communities.

While discussing their work and trading theories about their seemingly unconnected observations, a complex picture of interplay emerged. “As the frequencies of these different conversations mixed together, the picture of what was actually happening out there took form in front of us,” McCauley said.

Through analysis of nitrogen isotopes, animal tracking and field surveys, the researchers showed that replacing native trees with non-native palms led to about five times fewer roosting seabirds (they seemed to dislike palms’ simple and easily wind-swayed canopies), which led to fewer bird droppings to fertilize the soil below, fewer nutrients washing into surrounding waters, smaller and fewer plankton in the water and fewer hungry manta rays cruising the coastline.

Such a complex ecosystem cascade prompted the researchers to warn of the fragility of nature’s unrecognized interplays. “Such connections do not leave any trace behind,” Stanford researcher Fiorenza Micheli commented. “Their loss largely goes unnoticed, limiting our understanding of and ability to protect natural ecosystems.”

McCauley put it another way: “What we are doing in some ecosystems is akin to popping the hood on a car and disconnecting a few wires and rerouting a few hoses. All the parts are still there – the engine looks largely the same – but it’s anyone’s guess as to how or if the car will run.”