You are here: Home › Animal Kingdom › News › Gay animals an inconvenient truth for BBC, claims study
By Will Parker on February 8, 2013 in Animal Kingdom, News 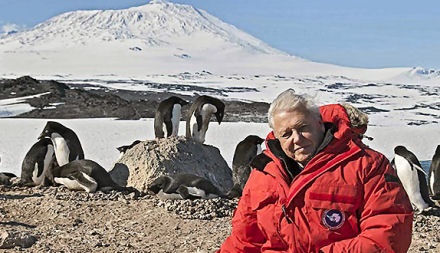 A new study in the European Journal of Cultural Studies criticizes wildlife documentaries produced by the BBC for ignoring widespread alternative aspects of animal activity such as homosexuality and same-sex parenting.

The study, by Dr Brett Mills of the University of East Anglia (UK), examined how breeding, sexuality, monogamy and ideas of the family were presented within the BBC’s classic television wildlife documentaries.

Mills claims the documentaries focus on human “norms” of sexuality and family and any alternative behaviors are side-lined or ignored. “Heterosexuality is upheld as the norm in wildlife documentaries and the idea of the family it presents is one which equates the family with heterosexuality,” he said. “The central role in documentary stories of pairing, mating and raising offspring commonly rests on assumptions of heterosexuality within the animal kingdom. This is despite a wealth of scientific evidence which demonstrates that many non-human species have complex and changeable forms of sexual activity.”

Central to Mills’ argument is his claim that wildlife documentaries commonly offer only a single interpretation of animal behavior. “Within the academic community there is clearly much debate over precisely what particular moments of animal behavior mean, and the purposes they fulfill. Yet wildlife documentaries commonly offer a single interpretation as unarguable and uncontested,” he said. “So there is this mismatch between what the science is saying and what is being presented in these programs.”

“Voiceovers tell the audience how to make sense of what is being seen,” said Mills. “Indeed, it is the necessity of envisaging a sense-making voiceover for sequences or images that is likely to be one of the factors taken into account when editorial decisions are being made about what to include or exclude from a program. The environment, via the voiceover, is interpreted and understood via decidedly human cultural norms and assumptions.”

He suggests that forms of animal behavior which are commonly missing in such programming demonstrate how ideas of sexuality, monogamy and family persist within human debates, adding: “The descriptions of animal behavior, because of their association with the ‘natural’, play a telling role in the policing of human behavior.”

Mills speculates that wildlife documentaries could usefully provide a view of alternative lifestyles and non-traditional ways of organizing families and social interaction. “Through polygamous bondings, decoupling of social monogamy and sexual monogamy, instances of surrogacy and adoption, and the success of offspring raised outside the male-female pairing, a whole range of species show not only is there no such thing as a ‘norm’, but also that many species are willing to change the ways in which they organize their daily lives in response to factors such as mating competition, food scarcity, and offspring availability.”