You are here: Home › News › Far out: measuring GDP from orbit
By Will Parker on September 7, 2009 in News 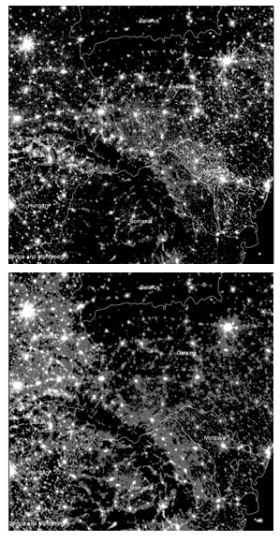 Illustrating the lack of precision in traditionally compiled figures, the authors cite the Penn World Tables, which show the growth figures from sub-Saharan African countries to have a 30-40 percent margin of error.

To improve accuracy, the researchers suggest combining measured income data with the changes observed in a country’s “night lights” as seen from space. Using satellite picture composites, they look at changes in a region’s light density over a 10-year period. “Consumption of nearly all goods in the evening requires lights,” they write. “As income rises, so does light usage per person, in both consumption activities and many investment activities.”

When the researchers applied the new methodology to countries with low-quality national income data, the new estimates were significantly different. For example, in the Democratic Republic of Congo, lights suggest a 2.4 percent annual growth rate in GDP, while official estimates suggest a negative 2.6 percent growth over the same time period. At the other end of the spectrum, Myanmar has an official growth rate of 8.6 percent a year, but the lights data imply only a 3.4 percent annual growth rate.

The team say they don’t envision the lights density data as a replacement for official numbers, but when added to existing data from agencies like the World Bank, the lights density can provide a better indicator of how these economies really are performing. “Our hope is that people start using this, either when they don’t have actual data on economic growth or when the numbers are pretty bad,” said Henderson.