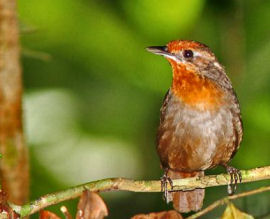 U.S. and German researchers have found striking parallels between the music of Bach and Haydn and the songs of a small brown wren living in the Amazon region.

According to a new study penned by the appropriately named Emily Doolittle (Cornish College of the Arts in Seattle) and Henrik Brumm (Max Planck Institute for Ornithology), the musician wren (Cyphorhynus arada) favors consonant over dissonant intervals, something that has rarely been observed in any animal species before. The perception of intervals and other aspects of human music by non-human animals are believed to be of considerable relevance with regards to the origin of human music.

But this bird’s musicality goes even further, say the researchers, as it also prefers to sing perfect consonances (octaves, perfect fifths, and perfect fourths) over imperfect consonances. This makes the wren’s song sound as if it is structured around a tonal center.

Doolittle said that because consonant intervals sound calm and stable, they are the basis for much Western Music. “It is because musician wrens preferentially produce successive perfect octaves, fifths, and fourths that their songs sound musical to human listeners.”

The researchers say they found passages in the songs of the wrens that had striking similarity to passages by the composers Bach and Haydn. “However, this does not mean that the musician wren is singing in a key the way a human musician might. Rather, the bird’s preference for consonances leads to occasional conjunctions of pitches which sound to human listeners like they are drawn from the same scale,” explained Doolittle. 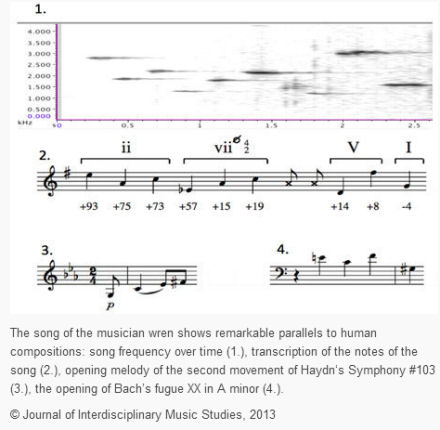 She and Brumm went further in their investigation and tested 91 human listeners by asking them to compare successions of intervals taken from the musician wrens’ songs with computer-generated songs in which the contours and durations remained the same but the intervals were slightly altered. The results showed that the human listeners considered the birds’ interval choices to be more “musical.” Interestingly, the song of the “Uirapuru” (the Portuguese name for the musician wren) is often featured in Brazilian music, and in 1917 the composer Heitor Villa-Lobos wrote a symphonic poem called “Uirapuru.” The wren is also the subject of several legends and fables, most relating to its pleasing song. Brumm says the new findings explain why this bird species plays such a prominent role in mythology and art but it remains mysterious as to how and why musician wrens perceive musical intervals.

Related:
Discuss this article in our forum
Tweet this: human language may have evolved from birdsong
Study identifies key aspects of music that evoke emotions in brain
Appreciation of musical harmony is nurture, not nature, say Aussie scientists
Pollution changing birdsong