You are here: Home › News › Study identifies key aspects of music that evoke emotions in brain
By Will Parker on December 20, 2010 in News 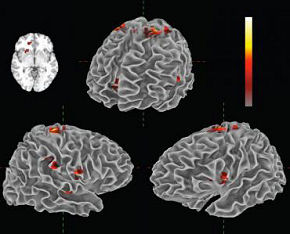 Using fMRI neuroimaging, Florida Atlantic University scientists have identified key aspects of musical performance that cause emotion-related brain activity, and they have shown, for the first time, how these performance nuances work in the brain, in real-time.

The researchers behind the study, published inPLoS One, say their work pinpoints how musical performances charge up the brain’s emotional centers, and say that their technique will lead to new ways of studying responses to music and other emotional stimuli.

For the listening part of the study, the researchers combined behavioral analysis with fMRI neuroimaging, a specialized MRI scan which measures change in blood flow related to neural activity in the brain, as participants listened to both performances.

The listening study was conducted in three parts. First, participants reported their emotional responses in real-time using specialized computer software. Immediately after providing their emotion ratings, they were placed in the fMRI and instructed to lie motionless in the scanner with their eyes closed and asked to listen to both versions of the music without reporting their emotional response. Immediately following the fMRI, they performed the emotion rating assignment again.

“We deliberately implemented these three steps in our study to ensure the consistency of the emotions our participants reported in the behavioral study with the results of the fMRI,” said lead researcher Edward Large.

The results have confirmed the hypothesis that the human touch of an expressive performance by a skilled pianist evokes emotion and reward related neural activity. Furthermore, listeners were found to have increased activity in the emotion and reward centers of the brain.

Interestingly, the results also revealed neural activity that followed performance nuances in real-time. These activations occurred in the motor networks of the brain that are thought to be responsible for following the beat of the music and in the brain’s mirror neuron system. The human mirror neuron system appears to play a fundamental role in both understanding and imitating action. This system is “fired up” when someone observes an action they can do being performed by someone else.

“It had previously been theorized that the mirror neuron system provides a mechanism through which listeners feel the performer’s emotion, making musical communication a form of empathy,” said Large. “Our results tend to support that hypothesis.”

Related:
Watch an animation of the brain while listening to Chopin
Catchy Tunes Have a Common Denominator
Musicians’ brains optimized to identify emotion
This Is Your Brain On Jazz
The Rhythm (And Melody?) Of Life