You are here: Home › Environment › News › Pollution changing birdsong
By Will Parker on September 22, 2013 in Environment, News 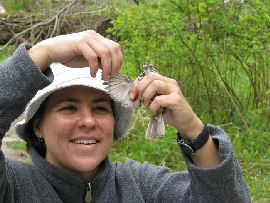 Songbirds are exhibiting inconsistency in their songs and pollution appears to be the culprit, say Cornell University ornithologists working in a region with high levels of PCB contaminants.

The article, published in the journal PLOS ONE, is based on observations from the Hudson River valley, a region with legacy levels of polychlorinated biphenyls (PCBs) as a result of decades of electronics manufacturing upriver.

DeLeon says a key finding is that song disruption is tied to specific types of PCBs (there are 209 variations), differentiated by the positioning and number of chlorine atoms. DeLeon tested for 41 of these variations to isolate their effects.

“Our results indicate that black-capped chickadees and song sparrows have higher total blood PCBs in regions with higher historic PCB contamination. The two bird species varied substantially in their congener-specific PCB profiles… black-capped chickadees showed greater variability in song with a change in the ‘glissando’ ratio of the first note of their two-note song, ‘fee-bee, fee-bee,'” explained DeLeon. “Song sparrows, with much longer songs, also showed ‘high performance trills’ that may be the result of other types of PCB molecules that are less toxic. In areas of PCB pollution, the species-specific identity signal in black-capped chickadee song varied significantly, while variation in song sparrow trill performance was best predicted by the mono-ortho PCB load.” The researchers conclude that PCBs may affect song production, an important component of communication in birds. “Effects of PCBs are extremely complicated. What this demonstrates is that most previous PCB studies may not give us the whole picture because they did not look at the specific type of PCB involved but just measured overall levels,” said co-researcher André Dhondt. “What Sara did was not easy. She found effects on the song and wanted to do more than just document that there was an effect.”

Related:
Discuss this article in our forum
Tweet this: human language may have evolved from birdsong
Parrots solve complex mechanical problems
Magnetic Fields May Be “Visible” To Birds
Urban Areas Turn Migratory Birds Into Couch Potatoes

Effects from Toxoplasma gondii infection appear to be permanent
Walk this way: how an upright gait made humans musical