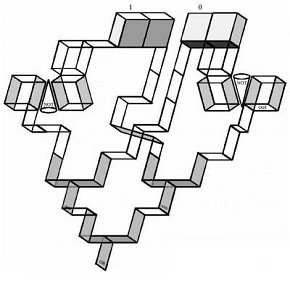 “Ideally, we would be able to glance at a complex visual stimulus [the software program], and our visual system [the hardware] would automatically and effortlessly generate a perception, which would inform us of the output of the computation,” Changizi hypothesized.

Changizi used simple drawings of unambiguous boxes as inputs for his visually represented digital circuits. The positioning and shading of each box indicates which direction the image is tilted. He also created visual representations of the logic gates NOT (which flips a circuit’s state from 0 to 1 or vice versa), OR (which outputs 1 if one or both inputs are 1), and AND (which outputs 1 only if both inputs are 1).

“Visually represented NOT gates flip a box’s perceived tilt as you work through a circuit, and OR gates are designed with transparency cues so that the elicited perception is always that the box is tilted toward you, unless overridden,” Changizi explained. “The AND gate is similarly designed with transparency cues, but contrary to the OR gate, it will always favor the perception that it is tilted away from you.”

According to Changizi, by perceptually walking through the visual representation of a digital circuit, from the inputs downward to the output, our visual system will naturally carry out the computation so that the “output” of the circuit is the way we perceive the final box to tilt, and thus a one or zero.

“Not only may our visual system one day give DNA computation a run for its money, but visual circuits have many potential advantages for teaching logic,” Changizi said. “People are notoriously poor logical reasoners – someday visual circuits may enable logic-poor individuals to ‘see their way’ through complex logical formulae.”

Although Changizi’s visual stimuli are successful at eliciting viewer perception, he says there are still serious difficulties to overcome. The visual logic gates do not always transmit the appropriate perception at the output, and it can be difficult to perceive one’s way through these visual circuits, although Changizi argues we may have to train our visual system to work through them, similar to the way we need to be taught to read. “My hope is that other perception and illusion experts will think of novel visual components which serve to mimic some digital circuit component, thereby enriching the powers of visual circuits,” Changizi said.