You are here: Home › News › Lack Of A McShrinky Makes Therapy Unappealing
By Will Parker on May 2, 2008 in News 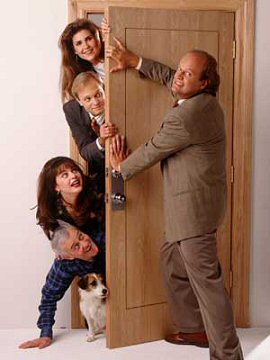 Television’s portrayal of psychological counselors as either buffoons or unethical clods makes people less willing to seek professional mental health services, suggests a new study by three Iowa State University psychologists. In the latestJournal of Clinical Psychology they contend that shows like Frasier, Tell Me You Love Me and In Treatment can lead to lower intentions among the public to use such services.

“Generally, it seems like therapists are portrayed unethically – like sleeping with the client, or implanting false memories, or talking about their clients outside the session,” said researcher David Vogel. “These are things that almost never happen with real therapists, but on a show – because they’re probably more exciting – they happen more frequently.”

“Therapists also often are portrayed as buffoons like Frasier or by being the butt of jokes,” co-researcher Douglas Gentile added. “In either case, these are not positive portrayals. They do not show the skill, expertise and ethics of professional therapists.”

The researchers based their findings on a content analysis of television portrayals of mental health professionals and how these portrayals influenced people’s perceptions about psychological services.

But it’s not just the portrayal of the therapists that may be keeping people out of therapy. It’s also the portrayal of those who seek counseling on TV. “If you examine the portrayal of the clients, it’s probably as bad or worse,” Vogel said. “So why would you seek therapy if you believe you’re going to be perceived negatively and you’re going to see someone who’s incompetent and not able to help you? One of the things that’s important to note about this particular study is that we showed that TV exposure was related to your perceptions of the stigma associated with seeking help, which has been found to be one of the main factors found from inhibiting people from seeking that help. So you perceive that yourself, and other people, would be crazy to go [to therapy].”

In a single year, according to Vogel, about 20 percent of the population experience a situation in their lives where psychological therapy could be helpful. But in a given year, only about 10 percent of the people who could benefit from therapy will seek help from a mental health professional. “Mental health services are already vastly underutilized, and this cultural stigma is part of the reason. And this study suggests that this cultural stigma exists partly because of the way that psychologists and their patients are portrayed on television,” the researchers concluded.