You are here: Home › News › Meditation Shown To Slow Progression Of HIV
By Will Parker on July 25, 2008 in News 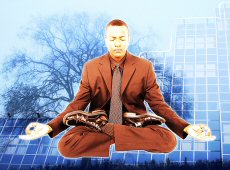 Researchers at the University of California – Los Angeles (UCLA) report that the practice of mindfulness meditation can halt the decline of CD4-T cells in HIV-positive patients. CD4-T cells are the “brains” of the immune system, but they are also the cells that are attacked by HIV, which slowly eats away at the CD4-T cells and weakens the immune system. Scientists have known for some time that stress also accelerates CD4-T cell decline, making the combination of stress and HIV a potentially deadly combination.

“This study provides the first indication that mindfulness meditation stress-management training can have a direct impact on slowing HIV disease progression,” said UCLA’s David Creswell. “The mindfulness program is a group-based and low-cost treatment, and if this initial finding is replicated in larger samples, it’s possible that such training can be used as a powerful complementary treatment for HIV disease, alongside medications.”

Mindfulness meditation is the practice of bringing an open and receptive awareness of the present moment to experiences, avoiding thinking of the past or worrying about the future. It is thought to reduce stress and improve health outcomes in a variety of patient populations.

In order to better understand the benefits of mindfulness meditation, Creswell and his colleagues are now examining the underlying pathways through which meditation reduces stress, using brain imaging, genetics and immune system measurements. “Given the stress-reduction benefits of mindfulness meditation training, these findings indicate there can be health protective effects not just in people with HIV but in folks who suffer from daily stress,” Creswell said.