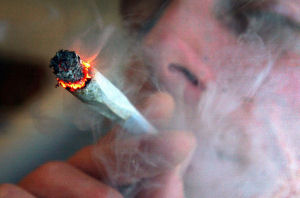 For the study, scientists injected “adolescent” mice with tetrahydrocannabinol (THC), the active component of marijuana, for a 10 day period. This period in the mouse lifecycle corresponded to the adolescence period in humans (12-18). A second group of adolescent mice received only a placebo. At the end of the treatments, both groups of animals were left undisturbed for two months, until they reached full adulthood.

If the findings are replicated, they confirm adolescence as a key phase of immune system sensitivity, and how changes during this period of immune system development can have important long-term consequences. “I hope that the knowledge that early exposure to marijuana is associated with immediate and long-term deleterious effects on the immune system may reach adolescents and their families,” said researcher Paola Sacerdote.

Hazardous levels of noise exposure for 90% of city dwellers

Unusual carbon-based molecule detected 27,000 light years away
This is your brain on dogs